What is DAO? Learn the concept and practical application of DAO

A DAO or a decentralized autonomous organization is a community-led entity without a central authority. Fully autonomous and transparent with smart contract that sets ground rules, implements agreed decisions and at any point, proposals, votes can be publicly audited.

How does DAO work?

DAO aims to follow a corporate structure where rules and regulations are built using open source code and are enforced through the use of smart contracts. Smart contracts are agreements that are programmed to execute if and when certain conditions are met.

To align the interests of both the organization and the members, the DAO encourages a distributed network of users. One of the key features of a DAO is that internal funding is used to incentivize and ensure that the organization runs smoothly:

BitShares was the first successful example of a DAO. It is a virtual e-commerce platform that links sellers and customers without a central authority. At the time, Bitshares was considered a decentralized autonomous company (DAC), a term coined by founder Dan Larimer.

In particular, the first DAO created on the Ethereum blockchain, named The DAO, was hotly contested because hackers found a vulnerability. 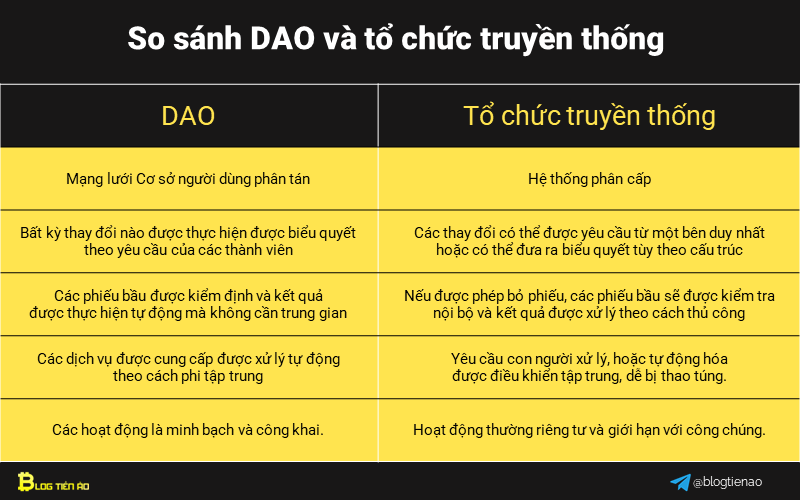 Advantages and disadvantages of DAO

The DAO is still a fairly stub. It is possible to list several blockchain projects that demonstrate its tenets: Bitcoin, Bitshares, Dash, MarkerDAO, uniswap, BitDAO,…

In addition to the DAO being adopted by crypto companies or financial operations, it is much more than that:

The future of DAO

The DAO has a long way to go before it achieves full mainstream adoption. Not all DAOs are efficient. In fact, most DAOs will be idle for a long time.

Just like investing in cryptocurrency there is always the possibility that the value of the governance token for a DAO could be zero.

However, the DAO is arguably the next “big trend” of the crypto market. Billionaire investor Mark Cuban has also said he sees value in DAOs in a tweet in May that read: "The future of corporations may be different as DAOs take over legacy businesses, …DAO enabled entrepreneurs can earn $,…”

The future of corporations could be very different as DAOs take on legacy businesses. It's the ultimate combination of capitalism and progressivism. Entrepreneurs that enable DAOs can make $. If the community excels at governance, everyone shares in the upside. Trustless can pay

The recent wave of institutional, mainstream investment in DAOs is also a sign of growth coming when in August Syndicate, a community-based investment system that simplifies the creation of DAOs, raised a $8M Series A funding round due to Andreessen Horowitz (a16z) leader.

And you, do you think this is the next investment trend? Please consider the article as information and not investment advice.