What is BTC Dominance? What does it mean? It always appears on price statistics and research sites! Why does it always go with the price, market cap of Bitcoin?

Those are the questions most common among newcomers about the crypto market's parameters. So in the article below, the Virtual Currency Blog will share with you all related knowledge BTC.D, follow along!

Dominance is a word in English, its meaning when translated as Vietnamese has "dominant, dominant".

And BTC Dominance (btc.d or DOM) is a technical term, understood as Bitcoin's dominance rate over the rest, More detail is the percentage cap that Bitcoin accounting for over the total capitalization of the entire cryptocurrency market.

This ratio represents the dominance, overwhelming level of Bitcoin with other altcoins in the market. There are times when it accounts for 60-70%, Currently fluctuating around 50-55%.

You can see this index at CoinMarketCap. Or you can look on the page Bitcoin exchange rate on Blogtienao. 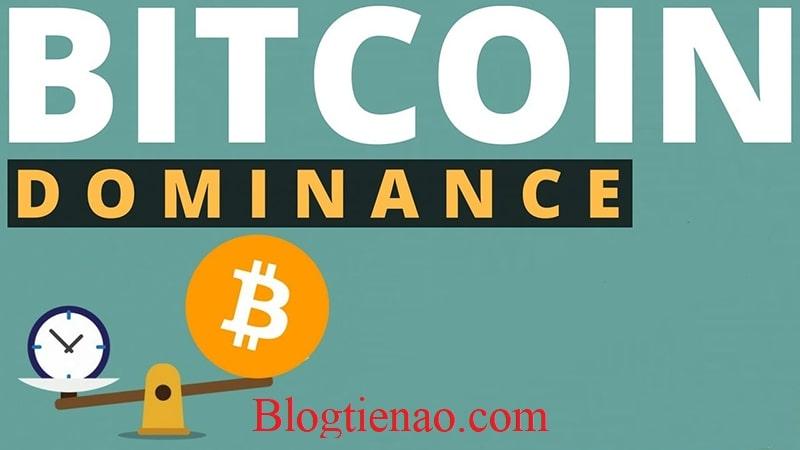 BTC Dominance rate is calculated by the bitcoin capitalization of the worldwide crypto markets.

At the time of this writing (March 28, 3), BTC Dominance reached 2019%, which is a high level compared to other altcoins. And we can also use this formula to calculate the ratio ETH Dominance or XRP Dominance to calculate the capitalization percentage of Ethereum and Ripple

Bitcoin is considered the "original currency" of Cryptocurrency market. Most people have to buy Bitcoin or USDT if you want to get involved in the cryptocurrency market and convert from altcoin to Bitcoin to preserve your capital Altcoin decline.

Bitcoin's price only fluctuates slightly and holds its value in the longer term than altcoins. This explains why BTC Dominance is always high even when the market is bearish or bullish.

In addition, in terms of data research, when the Dominance BTC percentage rise also signals a new bullrun, it is a sign that financial institutions, whales are entering the market.

As huge new money is poured into Bitcoin, and altcoin holders also gradually switch to Bitcoin in preparation for a new rally. And after the bitcoin cycle rises, the money flows back to the altcoin again from bitcoin.

In the cryptocurrency market, there are usually 4 scenarios that happen, pay attention to this analysis to guide your investment:

Therefore, you should always keep an eye on the BTC Dominance if you want to keep up with market trends.

What should we do when BTC Dominance increases?

As mentioned above, we will explain again:

As BTC Dominance increases, the capital from altcoins is gradually withdrawn and poured into Bitcoin. At this time, altcoins are difficult to increase strongly, but there are still potential projects that will increase strongly, they prove their potential, even an opportunity for them to break out more than BTC (but very difficult. ).

So for now, you should buy and hold well-rated altcoins, have a good product, and it's best not to over-price.

Above is the article "What is BTC Dominance? Summary of things to know about Bitcoin Dominance"Of the Virtual Currency Blog, hopefully through the article you will understand more about the Dominace BTC Index, as well as its meaning and role for the cryptocurrency market.

Also, we have to consider a lot of other aspects besides btc.d, which is the TOTAL and TOTAL2 index, as well as the DEFI, USDT.D index, This one needs real combat experience and feel the flow of money. . So that's why the novice or SML.

If you have any of these questions, please go to the FB group of BTA to ask questions: https://www.facebook.com/groups/cryptoblockchainvietnam