What is special about Oasys – Blockchain for games? 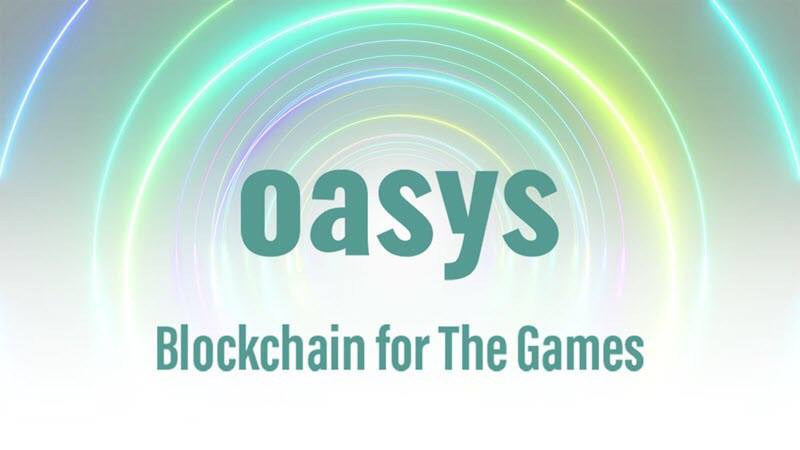 Oasys is a public blockchain developed specifically for gaming projects. The Oasys team consists of professionals with many years of experience in the gaming industry. The project has received investment of up to 20 million USD from many large investment funds in the world.

Oasys is known as one of the leading blockchains dedicated to gaming projects. Oasys with consensus by stake (PoS) saves power and is friendly to the environment. Besides, Oasys's unique 2-layer structure including layer 1 Hub-Layer and layer 2 Verse-Layer also makes a difference for this blockchain.

The Oasys team believes that the current blockchain platforms on the market do not really meet the above conditions, not helping traditional game projects as well as blockchain game projects to be supported in the best way. So they decided to build a new blockchain according to the Oasys architecture and dedicated to game projects.

How does Oasys work?

Oasys includes a highly scalable layer-1 called Hub-Layer and layer-2 called Verse-Layer. There can be multiple Verse-Layer directly associated with the Hub-Layer. Specifically, how the two layers work is shown in the diagram below: 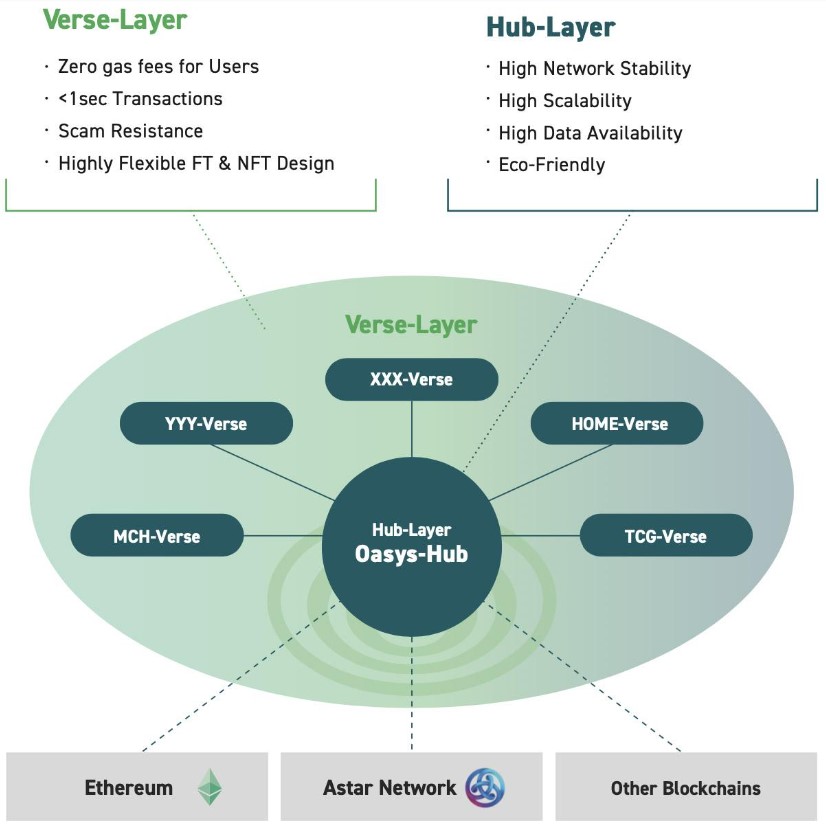 Hub-Layer, the public blockchain in Oasys is EVM-compatible. In theory, Verse-Layer is responsible for executing applications to create a Hub-Layer blockchain network that can only be used in certain cases, such as deploying batches of transactions, managing FT/NFT, bridge information management, etc. In rare cases, certain contracts may be approved for deployment on Hub-Layer through administrative approval. Since these contracts are under government supervision, the stability of the blockchain is not affected.

Verse Builder can specify one or more validators when building Verse, these validators will receive incentives as a third party.

Oasys removes the 7-day moderation period from Optimistic Rollups and allows transactions to be approved instantly like on Web2. This transaction speed will be faster than any other blockchain and layer-2.

Additionally, since all data on Oasys is stored in the Hub-Layer, high data availability is achieved, and even if the Verse-Layer is lost, it can still be fully recovered.

Oasys went live on mainnet on October 25, 10. Oasys mainnet will be rolled out in three distinct phases, designed to stabilize, integrate, and enhance the overall ecosystem. Specifically, the mainnet process is as follows: 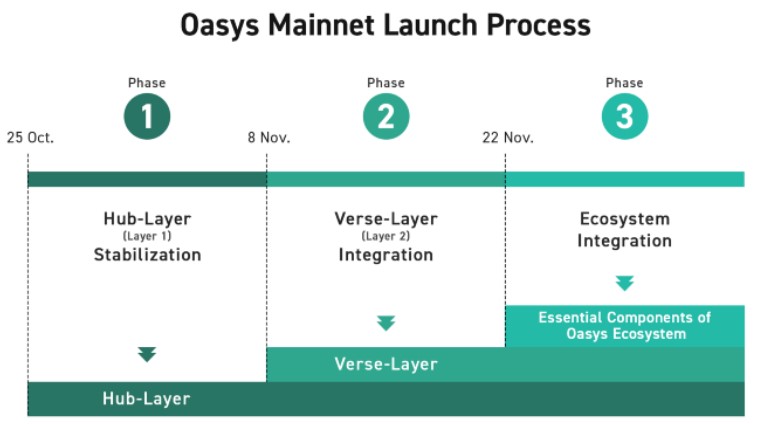 Daiki Moriyama, Director of Oasys, said: “The blockchain gaming ecosystem has grown rapidly over the past few years, showing the growing value that projects like Oasys bring to the industry as a whole. The mainnet launch is an important step in creating a separate blockchain for games. With full functionality, Oasys hopes to change the future of gaming and deliver tremendous value to gamers and game developers.” Currently, the team has not revealed too much about the project's plans and intentions in the near future, but as a project with many reputable validators and strong backers, the potential of the project is what we need. we cannot deny.

On 07/2022, Oasys successfully raised 20M capital in the Private Token Sale round with the leadership of Republic Capital. Notable names participating in the funding round include: Crypto.com, Gate, Huobi, bybit, Kucoin, Bitbank, Jump Crypto.

In addition, Oasys is a partner with many Game-Fi and NFT platforms to jointly expand and develop its ecosystem such as: tofuNFT; Carv; CelerNetwork. 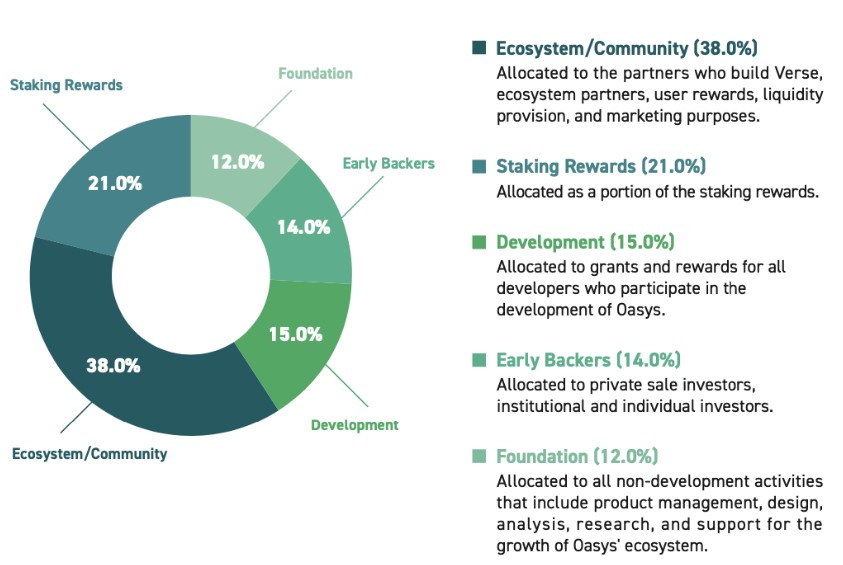 Projects in the ecosystem

Games built on Oasys are also on the rise, from role-playing games, action games, to countless other types of games. Some outstanding games include: Trouble Punk, Sheep Farm, Reign of Terror, SkyArk Chronicle, etc. And not to mention the game using SEGA's IP, Sangokushi Taisen. This year, the Oasys team said there will be at least 10 more titles that will soon be released on Oasys.

Enduring efforts with a $20 million investment in campaigns and rewards.Seychelles, November 26, 11...

39% growth on early investment in popular altcoin presale in 2022

Cryptocurrency is seen as the industry of the future. Beyond looking to the future of digital currency value...

10 cryptocurrencies under 1 USD should invest in 2022

Cryptocurrency investment has undeniably retained its strong appeal despite years of market volatility...

Seychelles, 22/11/2022 - Bitget, the world's leading cryptocurrency exchange, announces that it has registered in the Seychelles to open...
View more