The NEAR Protocol ecosystem has had a lot of notable details in July, from the new ecosystem milestone and the announcement of NEAR's biggest event of the year, NEARCON 7, to a major new initiative. to expand diversity in Web2022.

Take a look at the BTA Hub to see what's happening across the NEAR ecosystem, from the community to NEAR Foundation initiatives and so much more!

In July, NEAR Town had a major makeover that was a new Town Hall format called Ecosystem Panel, which allows the NEAR community to focus on projects and initiatives that emerge within the ecosystem.

With the Ecosystem Panel (First Ecosystem Panel), “Helping the Climate with Web3”, we can learn how blockchain, cryptocurrency and the Web3 world will create social benefits and bring climate to the world. efficiency, transparency and finance to a higher level.

Ecosystem Panel is moderated by many experienced professionals such as David Morrison (Head of Community Engagement at NEAR Foundation), Frederic Fournier (CEO and Co-Founder of Open Forest Protocol), Candice Ammori (Director of On Deck). Climate Tech), and Emiliano Gutierrez (CEO and Co-Founder of Raiz Farm).

On July 25th, NEAR held an AMA on the topic of “Socail Good” on Twitter Spaces. The AMA featured David Morrison (Community Lead at NEAR Foundation), Frederic Fournie of Open Forest Protocol, Candice Ammori of On Deck Climate Tech and Emiliano Gutierrez of Raiz Farm. 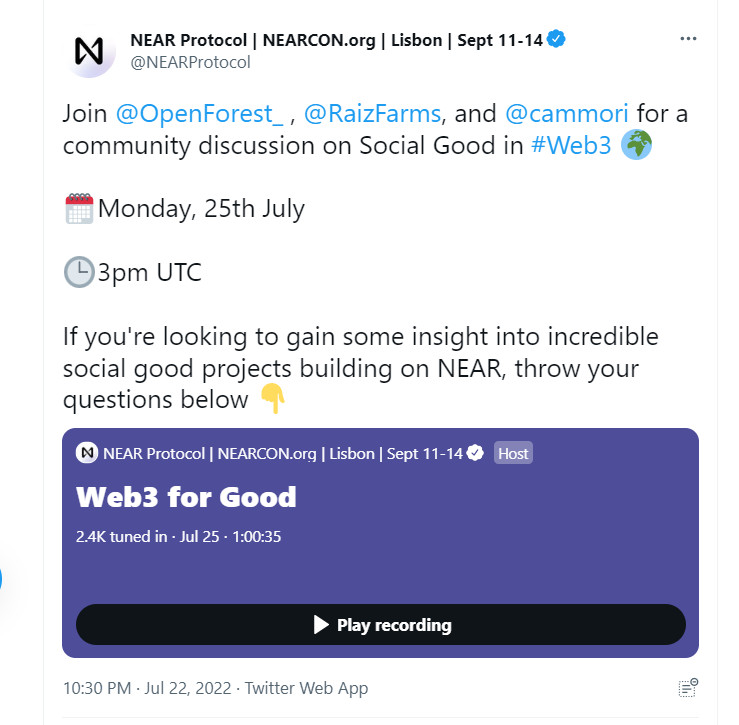 Big news from the NEAR Foundation

Also in July, the NEAR Foundation announced the NEARCON Beta, which is NEAR's biggest event of the year. NEARCON returns to the beautiful seaside city of Lisbon, Portugal, and the NEAR Foundation's goal has an ambitious goal of selling more than 7 tickets.

The NEAR Foundation also published “NEAR & Social Good,” their July series of content. The series explores some of the projects that are building for social good on the NEAR ecosystem.

In July, the NEAR ecosystem just hit a big milestone with 7 projects currently building on NEAR. This represents an amazing growth compared to last year when the figure was only a fraction of the previous year.

The number of projects on the ecosystem exceeds 700

Other notable news in July is: Sweatcoin – the first Move to earn project on the NEAR Protocol ecosystem has achieved 7 million wallets created. In the new Stake Wars II: 11 Validator, NEAR introduced the Chunk-Only Producer — the next step in NEAR's protocol decentralization.

Wallet provider Nightly has received the NEAR funding, joining the growing list of wallets in the NEAR ecosystem. Additionally, CornerstoneDAO announced an airdrop for LiNEAR users. While Aurora kicks off a crowdfunding program. Along with that, Aurora Labs has launched the VOTE token and is empowering its community with DAO governance. VOTE is a decentralized governance platform for the community to self-govern the protocol.

After community feedback, the NEAR Wallet issue has been fixed. Pagoda has successfully resolved a wide range of issues with currency prices on the NEAR Wallet.

In July, the NEAR Protocol Ecosystem had a lot of positive statistics and remarkable news showing the sustainable development of the ecosystem.

Hopefully, through the article of BTA Hub, it will help everyone get more useful information from the NEAR Protocol ecosystem in July and don't forget to continue to follow the next articles of BTA Hub!