dYdX builds its own blockchain based on Cosmos

Recently dYdX – 1 decentralized exchange built on Ethereum announced that dYdX will move to a blockchain based platform Cosmos for the update V4 with the goal of completely decentralizing the protocol dYdX. So the update V4 of dYdX What's remarkable? Everyone please read my post!

Why build on top of Cosmos?

Currently, the protocol dYdX processing about 10 transactions per second and 1.000 order positions and cancellations per second, with the goal of scaling higher. However, the basic problem is that the layers 1 and 2 above Ethereum cannot meet its requirements in terms of throughput rate as well as response 100% authorization required what the team wants by the end of the year.

Another major benefit of Cosmos is a chain that can grow to fit the network's best needs dYdX. The application of this is that traders will not have to pay gas fees for trading but only for transactions that are made similar to dYdX V3 and centralized exchanges. The fee will then be distributed as a reward to the validators and those who have stakes.

Some details about the dYdX V4 version:

dYdX V4 is a fully sovereign blockchain which means that the chain is not dependent on any external systems or blockchains.

All codes dYdX will be open source. Everything will run on permissionless open networks and no services are run by the parent company dYdX Trading INC. 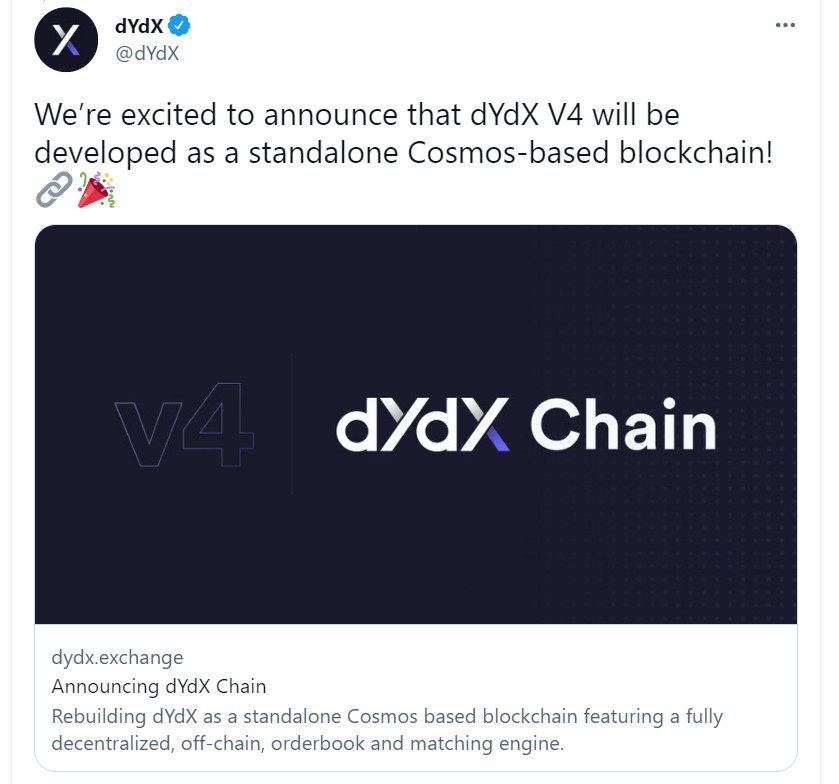 Announcement of DYDX on building a private blockchain based on Cosmos

With the goal of building open source code that can provide users with the best trading experience and products. Some of the key ingredients that make up this goal include:

Core Nodes is the core software that the validators receiver and supplier urge will run. They will be built on Cosmos SDK (programming kit for platform-built applications) Cosmos) – framework for building blockchains Tendermint. The core node will run: consensus mechanism, off-chain orderbook and order matching, all transactions (deposits, transfers, withdrawals...), oracles prices and other core systems.

Indexer is open source software that provides API , and WebSocket (is a protocol that supports two-way communication between the client and the server to create a data exchange connection) will cater to Web, mobile traders… The indexer will take the data that exists on the core blockchain and store it in a much more efficient format which allows dYdX V4 distribute the REST (most common way to structure Web API in programming) and WebSocket API effective. The indexing software will also be run by a distributed network, ensuring that the data will always be available to traders.

TypeScript and other potential language client applications to simplify interactions with the network. The client connects to both the indexer and the core node and will be used by programmatic traders as well as the website.

A fully featured open source version of the Web interface dYdX with the goal of serving users in the best way.

Version dYdX V4 for mobile is still being worked on by the team to make it available in an open source, decentralized way. And the team is ready to listen to comments from the community to develop optimally for the mobile version.