Maker (MKR) is a smart contract-based digital currency deployed on Maker Blockchain's Ethereum Blockchain based in Santa Cruz, California, and established since 2014. MKR coin was created to stabilize the price of another cryptocurrency called DAI through smart contracts called Collateralized Debt Positions (CDPs).

Maker Introduced in August 8, it is a "tokenized first" token on the Ethereum blockchain network. At that time, the virtual currency Maker raises capital by issuing MKR Token so that users can buy MKR with BTC, ETH through pairs of MKR / BTC or MKR / ETH and it is traded through its own exchange. was named OasisDEX before officially launched in April 2015.

Coin Maker Developed by a team of experts from various fields including blockchain technology, business and finance. The main members of the group include: 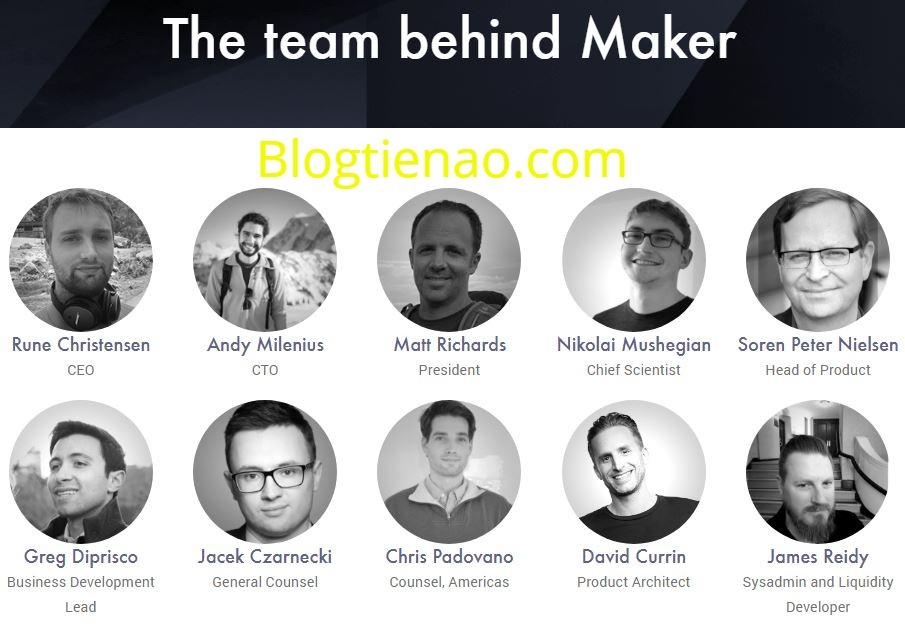 There are also many other members such as: Matt richards, Nikolai Mushegian, Soren Peter Nielsen, Jerome Grilleres... You can see the details of the members on the official website below.

You can perform MKR copper transactions via BTC, ETH, USDT, WETH, DAI at many exchanges such as Bibox, Oasisdex, IDEX, Gate.io, OKEx, Radar relay wherein the trading volume is at Bibox , and Oasisdex is the biggest.

What is the Coin Maker store for?

Coin electronic Maker is developed based on the smart contract of the Ethereum Blockchain system according to ERC20 standard, so it can be stored on any type of wallet if the wallet is built in accordance with Ethererum's ERC20 standard. Some types of wallets can be used for storage Maker as MyEtherWallet, Safe deposit, Ledger Wallet, ImToken, Dappradar, ... of which MyEtherWallet wallet is used most.

Also, you can host Maker coin directly on the electronic wallets of the exchanges for ease of trading. But if you are a long-term investor and do not need regular trading, you should use the separate wallets we have suggested for you above.

Through the article above make sure you have understood What is a maker, and had an overview of copper Maker coin already. And if you have any questions or would like to share your knowledge about Maker With us, please contact us in the comment section below, we will respond to you as soon as possible. Finally, don't forget Like, Share and give us one 5 star rating below to support the Virtual Money Blog.