Currency is a means of exchanging goods and services. Exists in the form of banknotes or coins. Usually issued by the government and functioning as a means of payment. 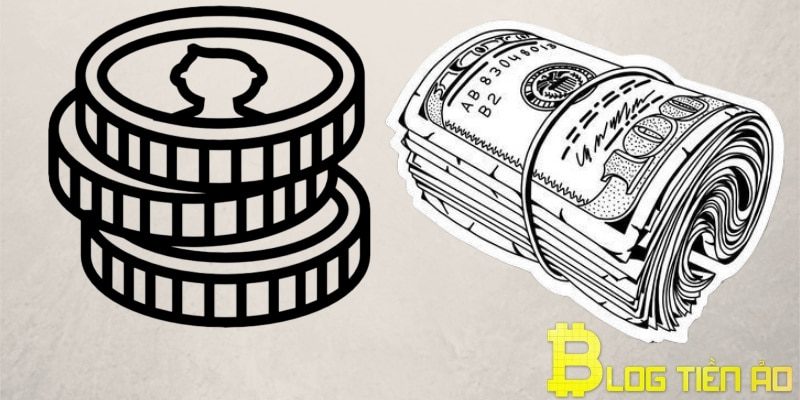 In the modern world, money is now the main means of exchange. It is accepted at face value.

As everyone knows recently a new form of currency is virtual currency and Bitcoin is an example. No physical entities and government support. It is stored in electronic form.

You can refer to the summary history via the following infographic:

Taking place around 9000 BC. The direct exchange system is not effective. Restricting people from development throughout thousands of years of history.

The exchange is very simple: For example, you have rice, your rice and your neighbors have cows. Then there are times when you want to eat beef, and your neighbor wants to eat rice. You will then get 4 or 5 bags of your rice in exchange for a cow from a neighbor. 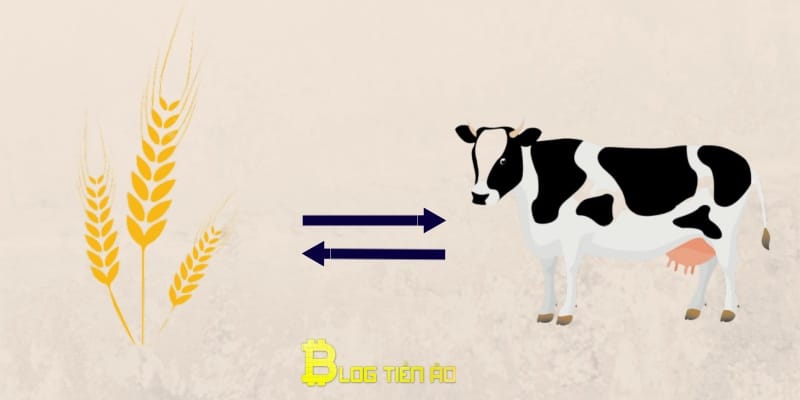 This system has a problem related to the nature of money that we will discuss in the next section. Therefore, it is necessary to have something as an intermediary, which can convert the value of the goods.

Take place about 1200 years BC. Goods gradually become more diverse with many items such as weapons, food, ...

From here the intermediary system of exchange between goods is formed. Europeans traveled around the world to exchange handicrafts and furs in exchange for silk and perfume.

They use all kinds of objects that can be used to exchange goods such as: shells, nuts, ... However, these items are also not durable. Furthermore have no storage value or are not easy to transport. 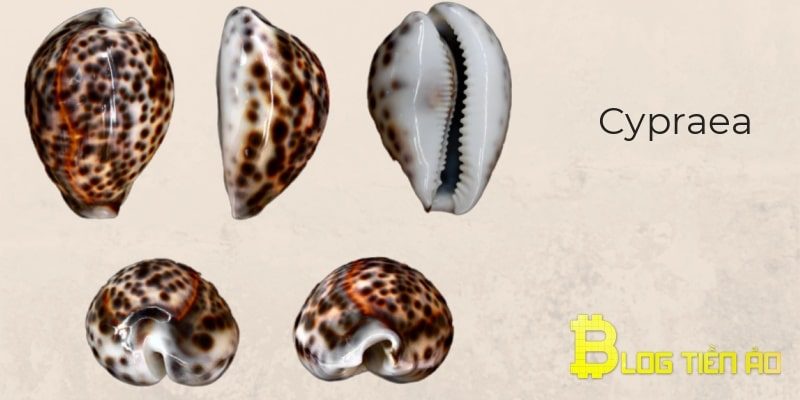 Birth of a coin

The first official currency was minted by King Alyattes of Lydia, in present-day Turkey. Over the next several years, the coin evolved and changed into a more rounded, nicer design.

Lydia's currency has helped the country grow both internal and foreign trade. Make it one of the richest empires in Asia Minor.

The popularity of coins is widespread. Gold and silver were the most popular forms of currency during that time. Although money is also minted by some other metals, it cannot be compared with gold and silver.

Precious metals like gold and silver had a standard that set them apart from other metals. That standard is extended to this day.

For money cast from precious metals like gold and silver. The circulation will occur problem. At the same time, growth and supply are limited by the availability of these metals.

Moreover, they take up a lot of space and space, making storage and carrying inconvenient. This was a major problem and was solved until paper money appeared.

Banknotes were issued in China for the first time. And it was recognized as currency in the 10th century. However, its early forms, date back to ancient times in many parts of the world.

In 1290, Marco Polo, a Venetian-born merchant and explorer, was the first European to reach China by the Silk Road to bring paper money back to Europe.

The first European banknote issued by Palmstruch Bank, Sweden in 1666: 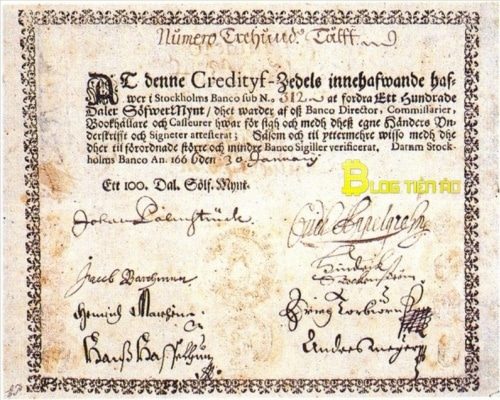 In 1694 the British government granted the legal right to print money to the private Bank of England owned by William Paterson. And Bank of England became the world's first central bank.

In the United States, the US Federal Reserve has the same rights after its inception in 1913. Governments are authorized and represent the printing of money legally. They are partly supported by gold or silver and theoretically. Can be converted into gold or silver anywhere

By the early 20th century, most countries had adopted this gold standard. And support their legal currency issuance with a fixed amount of gold.

Central banks issue banknotes guaranteed by the amount of gold they have in the treasury, as people are increasingly in need of banknotes. So banks started to issue more banknotes so they could lend and circulate at the same time.

This is a monetary system that took place from 1871 to 1971. In which paper money can be freely converted into a fixed amount of gold. In such a monetary system, gold is a support, guaranteeing the value of money.

The international gold standard appeared in 1871 after being adopted by Germany, and by 1900, developed countries were associated with the gold standard.

In the US, the $ 20 coin is backed by $ 20 gold, with 100% of the reserves equivalent. This note is a legal gold certificate with the treasury.

You can use this money anywhere, give it to a treasurer who will give you the corresponding amount of gold or silver.

This time gold is at the peak. Governments worked very well to make the system work, but the events of World War I in 1914 made the gold standard change forever.

Also known as political ideology. At the time of the war the countries were in debt. The financial ability was seriously affected and worse.

Countries began to advance to the gold exchange standard. In which the money is guaranteed by a part of gold, no longer 100%.

The introduction of the system

As in the US, allowing printing of $ 50 notes is exchanged and circulated corresponding to $ 20 gold. That is reduced to 40% of the gold.

The period of the two American wars was the country that benefited the most. Because of not taking part in the fighting plus selling weapons, the real amount to the parties. The war brought America into a golden age.

In 1944, World War II was about to end. Western powers met in (New Hamshire, USA) to come to terms with a new monetary system. The Bretton Woods system was born.

How it works Bretton Woods

Bretton Woods simply understands that all currencies in the world will be supported by the US dollar, and the US dollar is backed by gold at $ 35 per ounce of gold (an ounce is a measure of mass). This is understandable because the United States owns two-thirds of the gold worldwide. 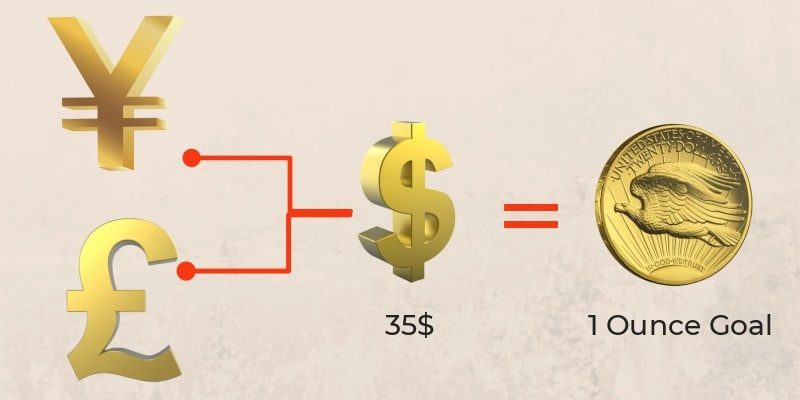 Bretton Woods has given security for all currencies. Helping the monetary system to be stable as they are valued together through the dollar through gold.

Under that system, central banks of countries other than the United States have a duty to maintain a fixed exchange rate between their currencies and the dollar.

The US printed money without any gold reserve ratio set. When the US government suffered a serious budget deficit because of printing and spending too much money on the war.

In 1965, the dollar fell into crisis. At that time, the 18th President of France, Charles de Gaulle, realized the problem. The United States does not have enough gold to guarantee dollar printing.

At this time, France intended to withdraw its dollar assets to get gold. Other countries have also noticed and jumped on the bandwagon. This caused the US to lose 50% of its gold from 1959 to 1971.

Along with that, the amount of dollars returned to America was 12 times the amount of gold they had. Great Britain also demanded that $ 750 million be exchanged for gold in the summer of 1971.

In this situation, in August 8. US President Nixon announced on television to abolish the gold standard from the dollar. Finally, the United States removed the fixed value of the Dollar.

The dollar was soon devalued. World leaders sought to restore the Bretton Woods system but this attempt failed. The system collapsed from here.

Since August 8, all other currencies of every country in the world have become Fiat Money. This is because every monetary value link with gold has been removed.

The fact that all currencies of the countries are based on the dollar will lead to the risk of losing its value inflationary or even worthless in the case of inflation.

Therefore, the predestination is guaranteed by Faith. If people lose faith in a nation's currency, that money will no longer hold its value.

Mobile payments are money paid for a product or service through a portable electronic device such as a smartphone or tablet.

Mobile payment technology can also be used to send money to friends or family members. Increasingly, services like Apple Pay and Samsung Pay are competing for retailers to accept their platforms for point-of-sale payments. 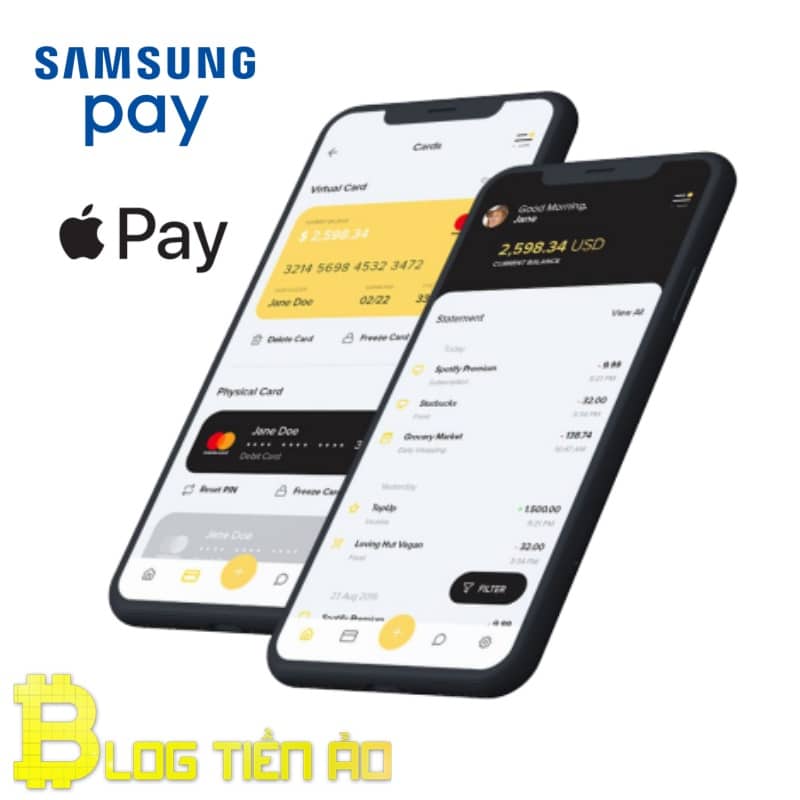 Cryptocurrencies (Cryptocurrency) or virtual money. It is a currency with no physical entity.

The most outstanding is Bitcoin, released in 2009 by the identity Satoshi Nakamoto.

Unlike the government issued currency. It is not issued by any government or organization.

Virtual money is completely decentralized. This is also the reason why many people think this is the future currency will replace the legal currency.

Overview of properties and monetary value

The function of currency with present and future time is immeasurable. Let's list some properties:

There are currently 180 official currencies in the world. It belongs to 193 countries that are members of the United Nations. Two UN observer states. Nine practically independent territories and 33 overseas territories.

Including several countries using multiple currencies at the same time. Inside there is an official currency and several pegged and recognized currencies. Some examples include: VND (Vietnam dong), USD (USD), EUR (Euro),…

Some concepts related to money

The formation process looks like the process of human evolution haha. Everyone read to accumulate yourself an additional knowledge offline. Thanks and wish for success.