What is Proof of Work [PoW]? Details on how it works 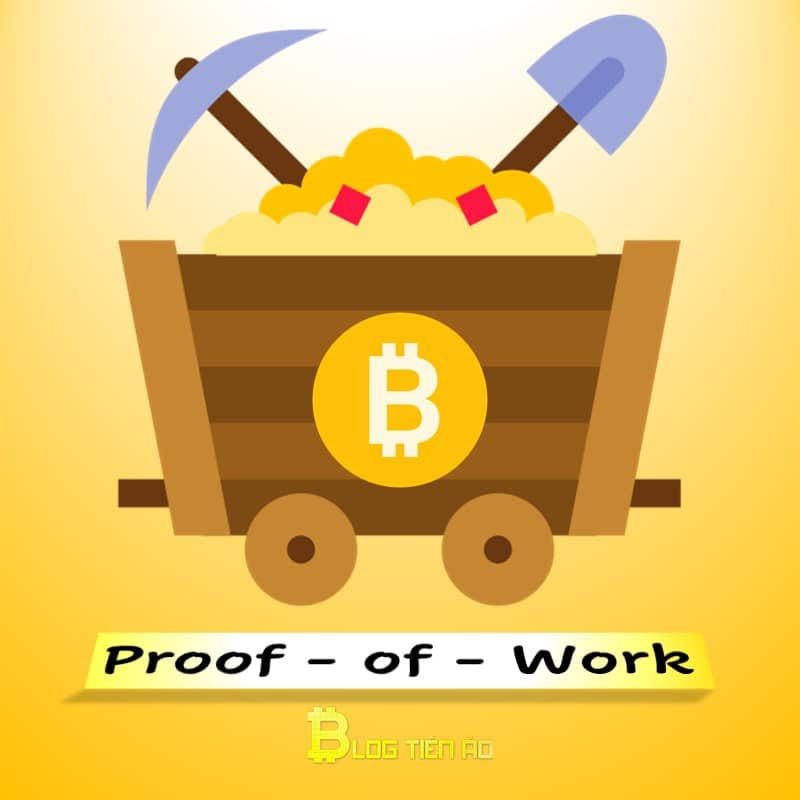 Proof of work ̣(PoW) is the first consensus algorithm created in the network Blockchain. Used to confirm transactions and produce new blocks in the chain.

Also known as proof of work. The Pow algorithm is an essential part of the cryptocurrency mining process. This is a basic consensus model of Bitcoin and Bitcoin is the cryptocurrency that pioneered the use of PoW. Accordingly, it was designed by Satoshi Nakamoto.

PoW requires the owners of computers in the network to solve a complex math problem in order to add a block to the chain. However, the mathematical answer is not easy.

A decentralized ledger gathers all transactions into blocks in a network. Solving this problem is called mining, and “miners” are participating nodes that compete with each other to validate transactions and receive rewards in cryptocurrency.

What is a complex problem in blockchain?

How to solve the problem

Proof-of-Work works like a complex math problem. It requires a lot of computational effort to solve. There are several factors that help solve this problem, which are:

With the growth of the chain, numerous obstacles arise and algorithms require additional hash power to solve these problems. So the answer to this PoW problem is “hash function” or “hash”.

Why complexity is needed

Difficult problems take a long time to form blocks. So the difficulty shouldn't be too complicated. This problem causes transactions to go undone and results in work being stopped in a process.

Fast or slow settlement time will affect block generation. And it will be meaningless if you do not do it within a certain time. However, you question the downside of this: If the problem is too easy. It makes the network vulnerable to DoS attacks and spam.

The answers to these questions should also be easy to verify and check. Because not all nodes in the network can analyze if the calculation is correct. And last but not least is trust. You will have to trust other nodes to decide and this is where blockchain proves its transparency.

How to implement PoW in Blockchain

PoW in the Blockchain is implemented as follows: “Miners” seek to solve a computational challenge to generate new blocks and start confirming transactions.

Then the verification of transactions in the block will be added. Organize these transactions chronologically in the block and announce the newly mined block to the entire network (this process does not take much energy and time). The power consumption part is solving the difficult math of linking the new block to the last block in the blockchain. 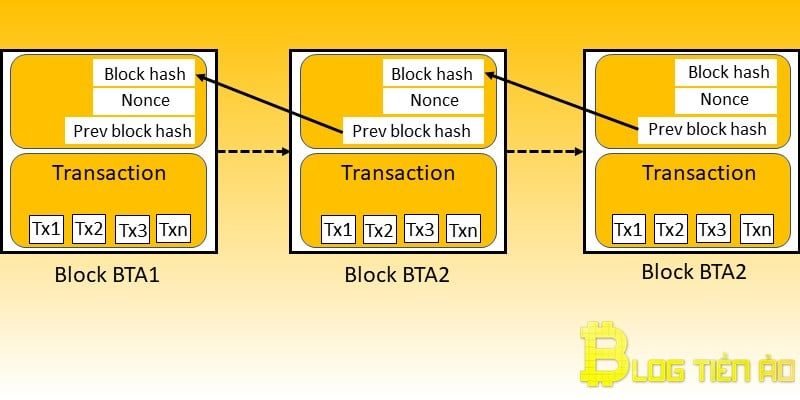 Renew the "miners" (miners) after solving the problem set by the server (network server). The nodes on the network will confirm the submitted answer and finally receive the reward: 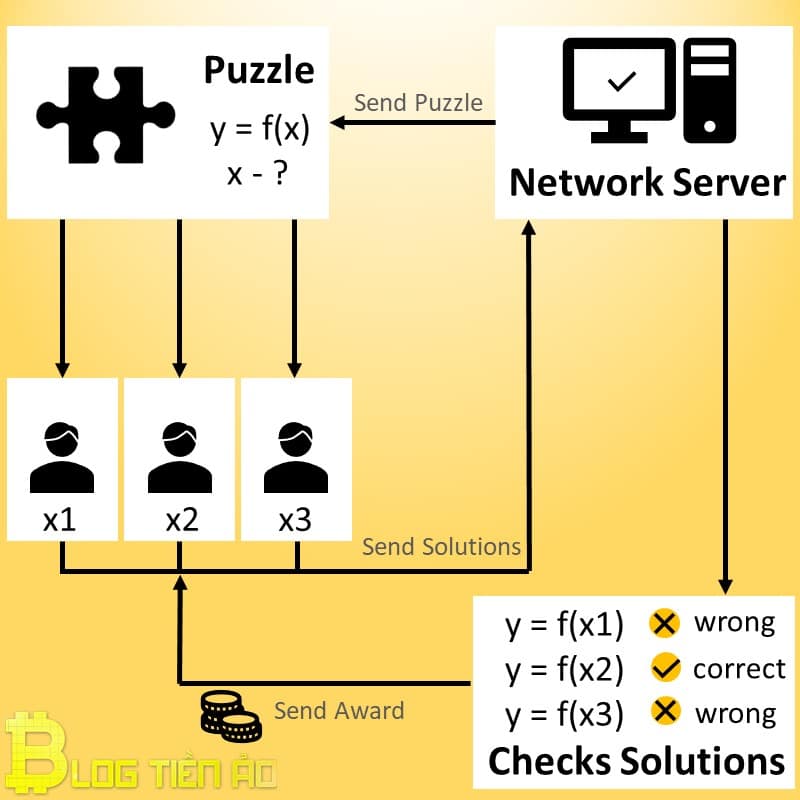 Why Proof-of-work is successful on blockchain

PoW is quite successful at the moment for the following reasons:

PoW for Bitcoin and Other Cryptocurrencies

As introduced in the concept section, Bitcoin pioneered the use of PoW. And also the most prominent. The proof-of-work system on the bitcoin network is called hashcash. It allows to change the complexity of a problem, increasing security.

When a miner finally finds the right solution. Node will broadcast it to the entire network at once. They then receive the cryptocurrency (reward) provided by PoW.

At the time of writing this article, mining a block takes 10 minutes. The bitcoin network gives miners a winning 12,5 bitcoins. The amount of bitcoins won by half every 4 years or so (this concept everyone should read What is Halving? easy to understand).

Similar platforms used: Etherum (ETH), Litecoin (LTC), Monero (XMR), Dogecoin (DOGE). With Bitcoin, at the end of a process, new Bitcoins will be distributed by the network to miners (miners) with each block being rewarded. 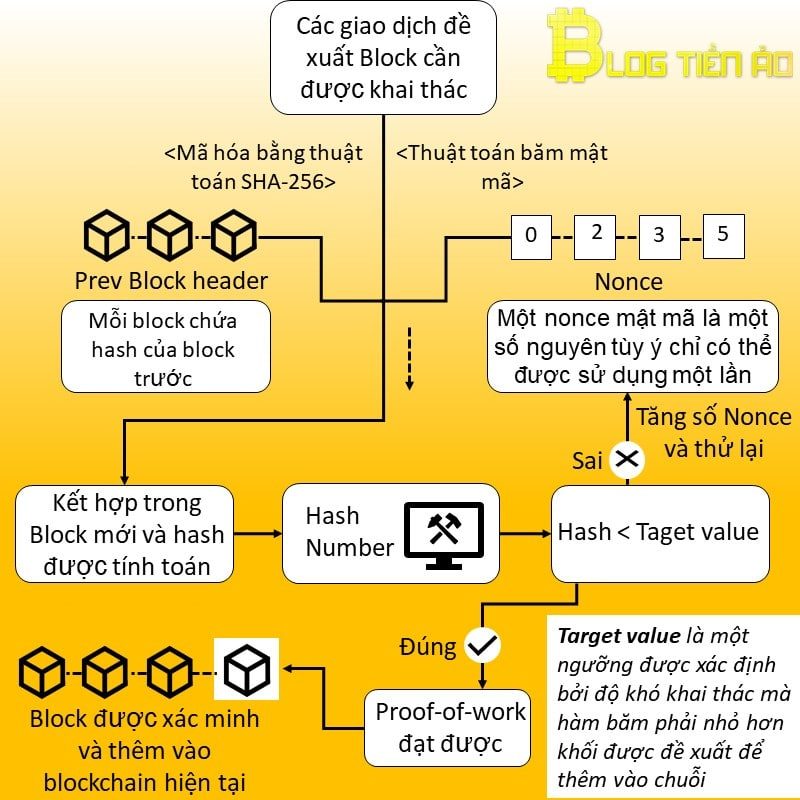 In the process, Proof-of-work helps protect the network against malicious attack. Make sure that “miners” cannot add fake blocks to the blockchain. If a miner tries to attack the network. They will need to use a lot of resources as well as computing force. But they won't get the rewards (Newly released Bitcoins) that genuine miners did.

This is not the only consensus mechanism. Some cryptocurrencies use a different mechanism, Each with its own pros and cons, although with the same purpose: To provide a way to process and verify transactions, while keeping the network secure.

The purpose of Proof-of-work is to give miners an incentive to support and secure the network by making a profit to do so and to make it a disadvantage to attempt to hack the network.

Evaluate the pros and cons of Proof-of-work

Can be called a mass attack. This is a case where a single user or a group of users controls most of the mining power. Attackers have enough power to control most events in the network.

They can exclusively create new blocks and receive rewards because they can prevent other miners from completing blocks. And there is also a chance to reverse all transactions. A good example of this type of attack is the Bitcoin Gold network that was hacked for 18 million USD in 2018. And there are many other cases called “51% attack”.

So, I introduced you to Proof-of-work and detailed how it works. As well as all PoW related matters. Everyone read on to know more about how it works in blockchain. As well as the question that I am a miner, what will I do in this case.