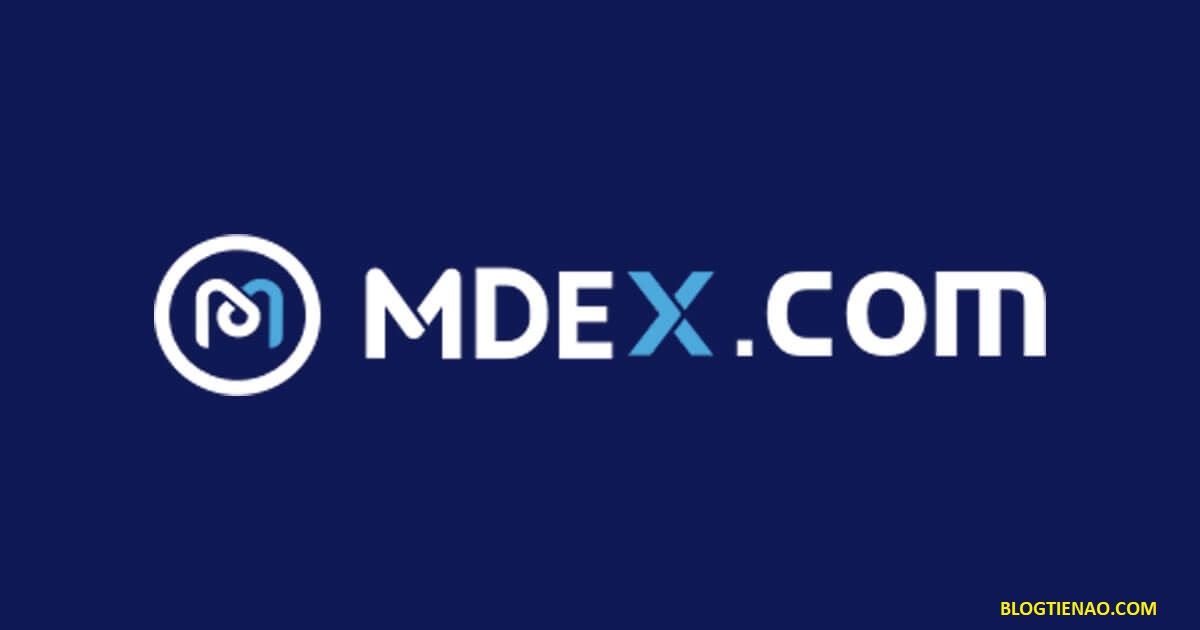 What does MDEX have compared to other names in HECO Chain? What function does it have and what is its product?

MDX - token of Mdex, not only has the function of a means of exchange, but can also be used in voting, redemption, fundraising and other purposes.

Users who trade on Mdex can earn mining rewards, which will be a magnet to attract more people to the exchange.

According to public information disclosed by MDEX: the exchange's revenue comes from trading fees, which account for 0,3% of trading volume.

Out of the 0,3% transaction fees charged, this number will be used to grow the MDX ecosystem:

MDX can be used in the following cases: 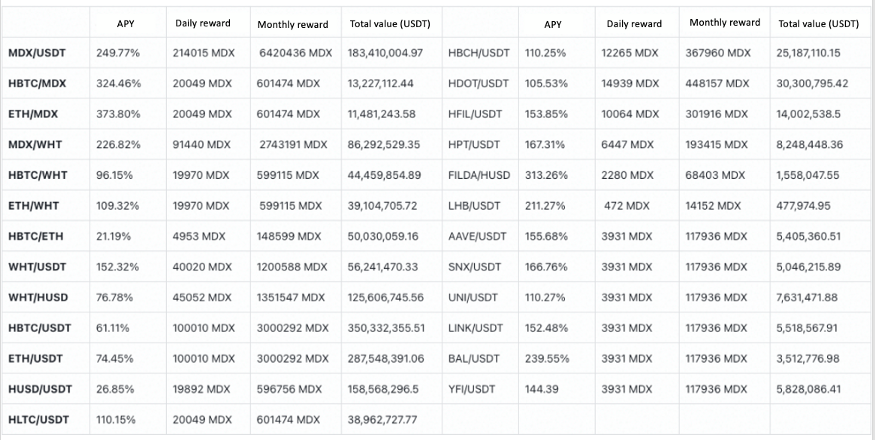 Market position and performance of MDEX

On February 25, MDEX's 2-hour trading volume in the DEX sector surpassed the $24 billion mark, at one point surpassing both Uniswap and Pancake.

MDEX is a decentralized exchange based on the AMM mechanism and built on Heco, and it also supports the Ethereum public chain.

MDX will be redeemed and burned regularly, which will ensure a gradual increase in MDX value in the future.

The gas fee of MDEX is very cheap, the average of each transaction is about 0,001 USD, which is extremely cheap compared to its competitor Uniswap.

And users will also receive a reward of MDX for the transaction fee paid.

Following is the market performance data released by MDX: 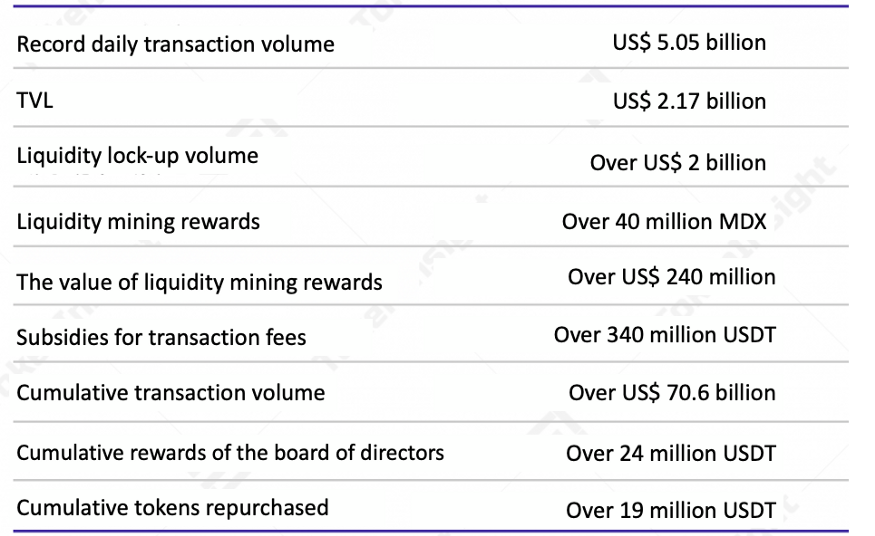 Below is a brief summary and comparison of the market data of DEX:

MDEX has all the functions of a standard DEX, in general it is no different from other exchanges.

Users can Swap, Trading Mining and Liquidity Mining (contributing shares to farm, I will guide in detail below). 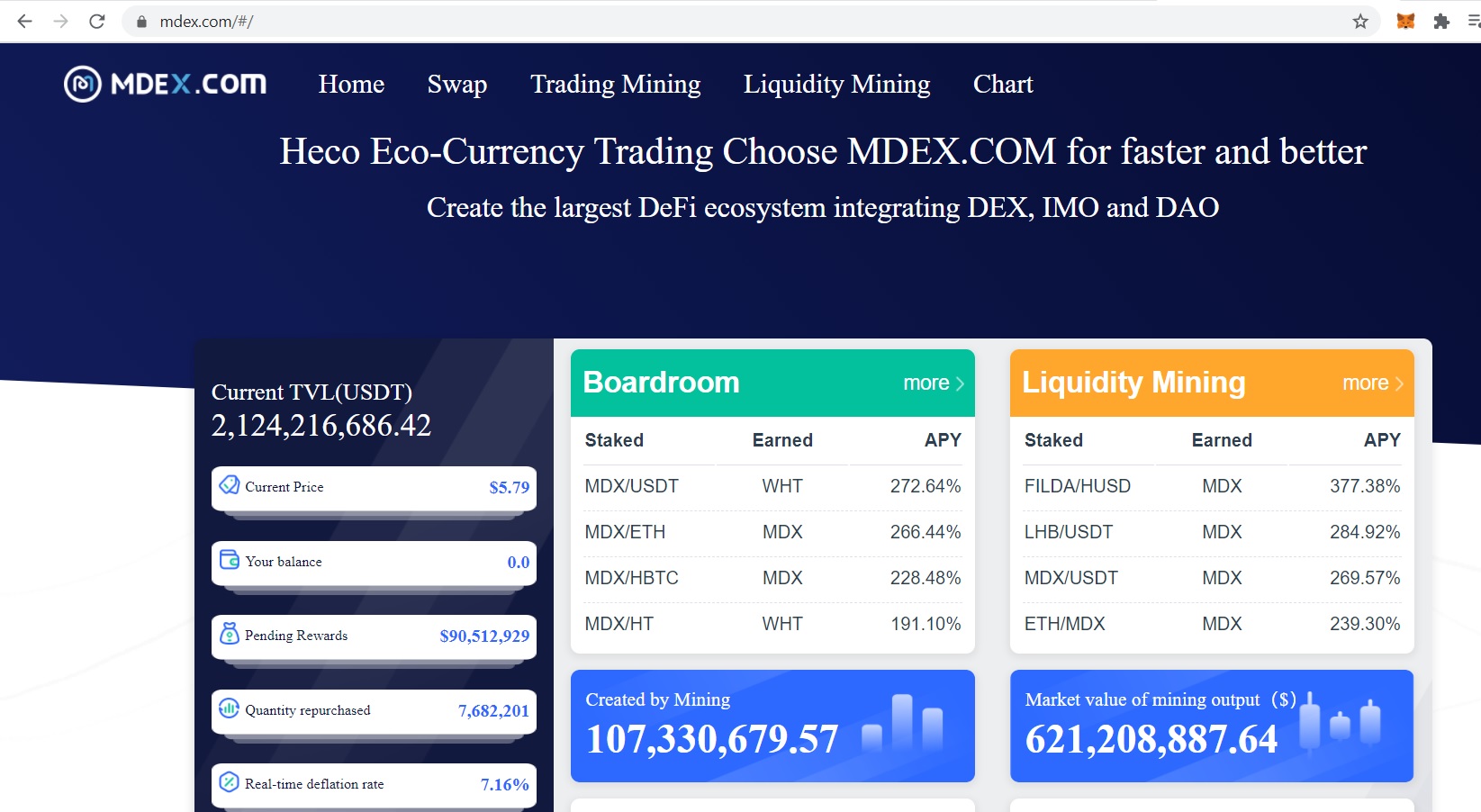 Is MDEX safe to use?

MDEX is being considered the No. 1 on HECO, so users can rest assured when trading or farming here.

In addition, MDEX has been AUDIT and experienced development team. 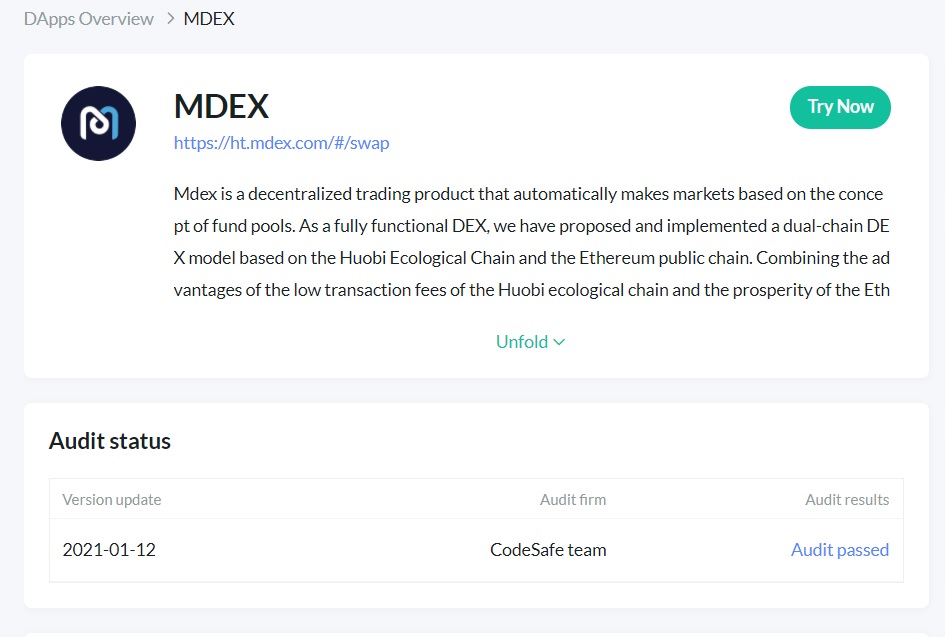 Note: stay away from projects labeled “Rug Pull”. Rug Pull are dead projects, scammers take all of the users' coins to run

Guide to farming on MDEX 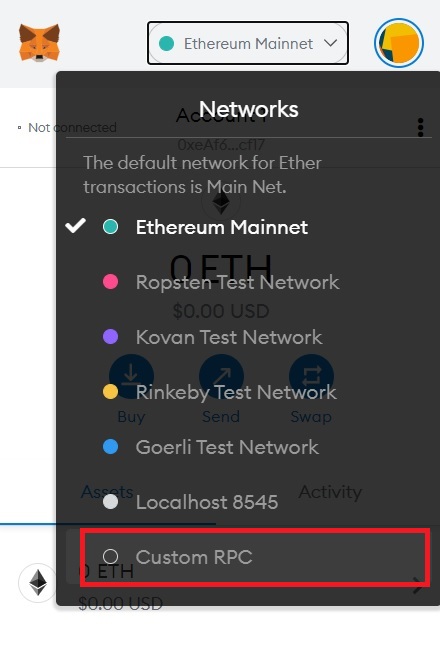 Fill in the configuration for the network as below and then click the Save button. 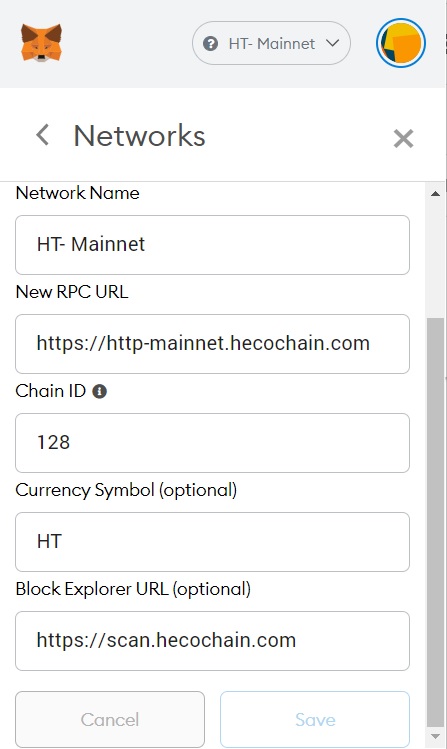 The above transaction is also very simple, first you connect to the Metamask wallet that has integrated Huobi ECO Chain. 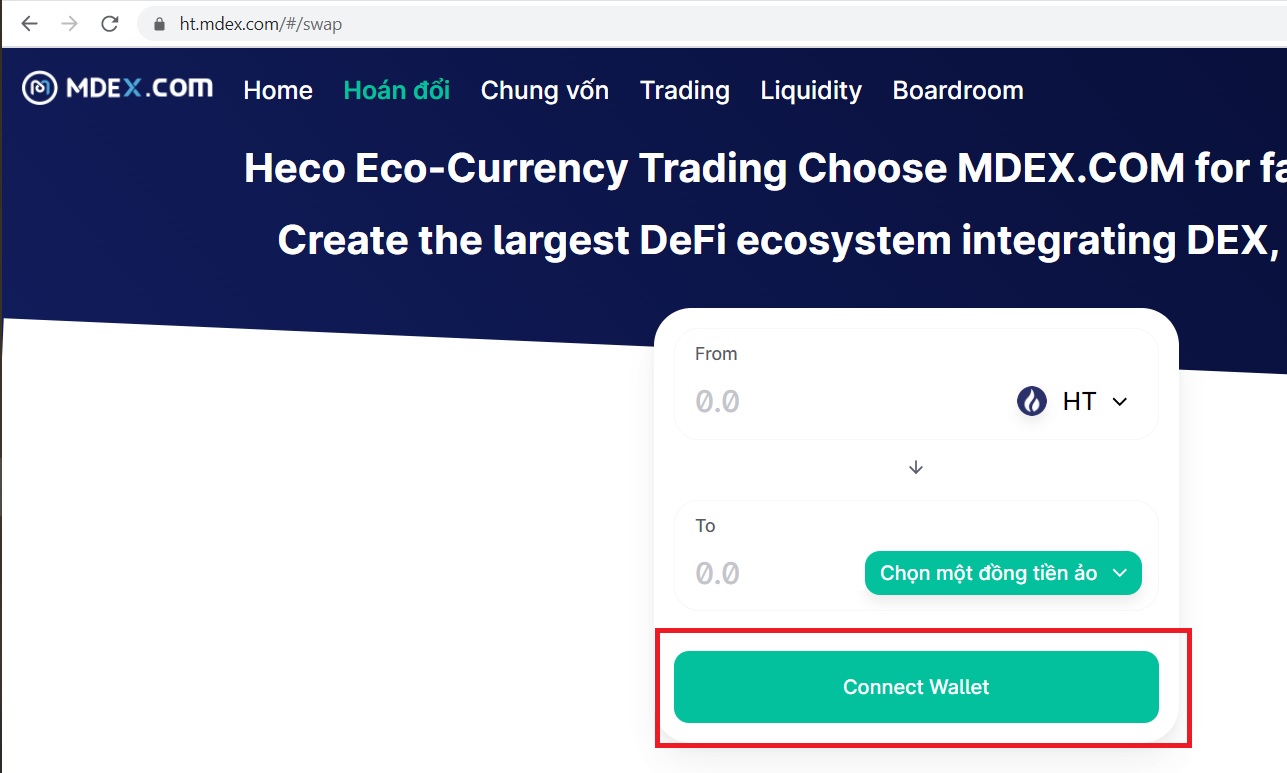 Go to Swap and select the type of token you want to trade. 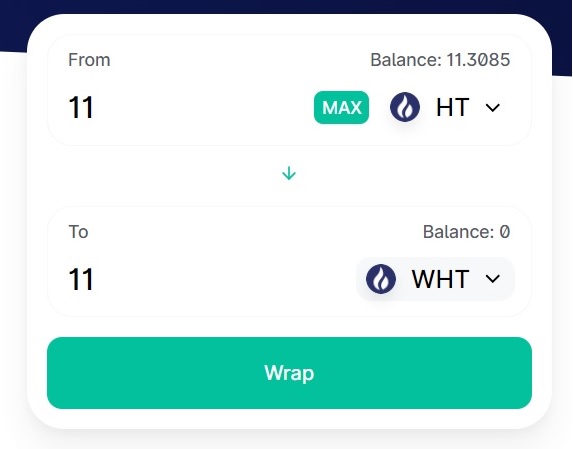 Then check the transaction and confirm it on the wallet.

Instructions for adding liquidity and farming on MDEX 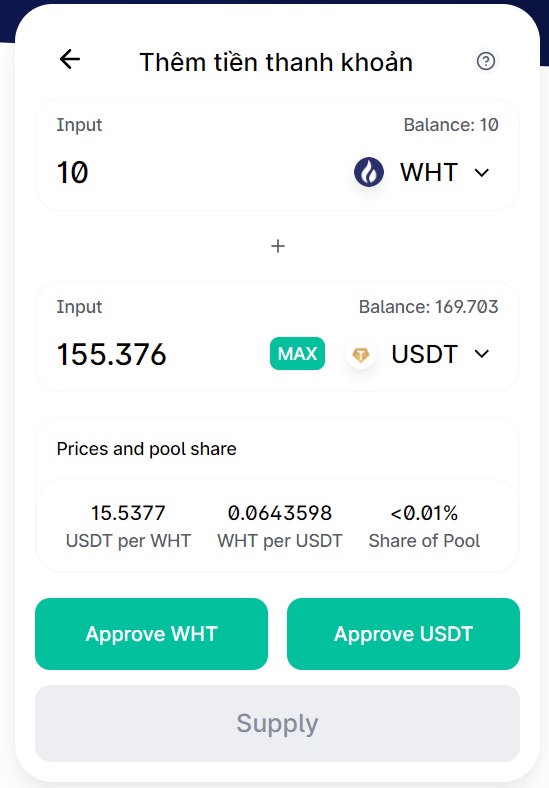 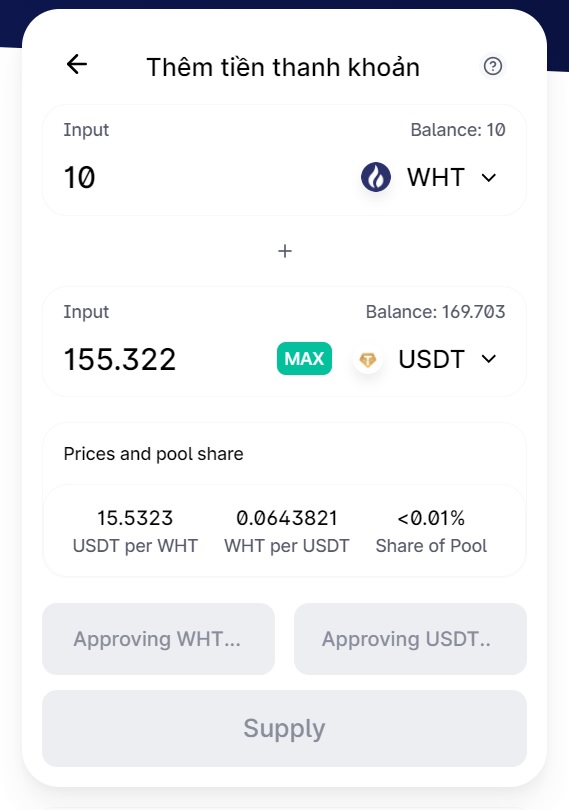 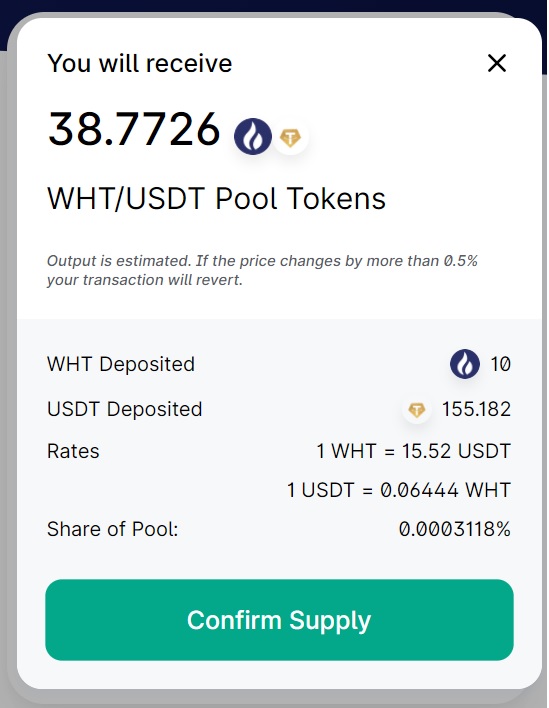 Then click Coinfirm Supply. And coming here means you have contributed your shares to MDEX to farm. 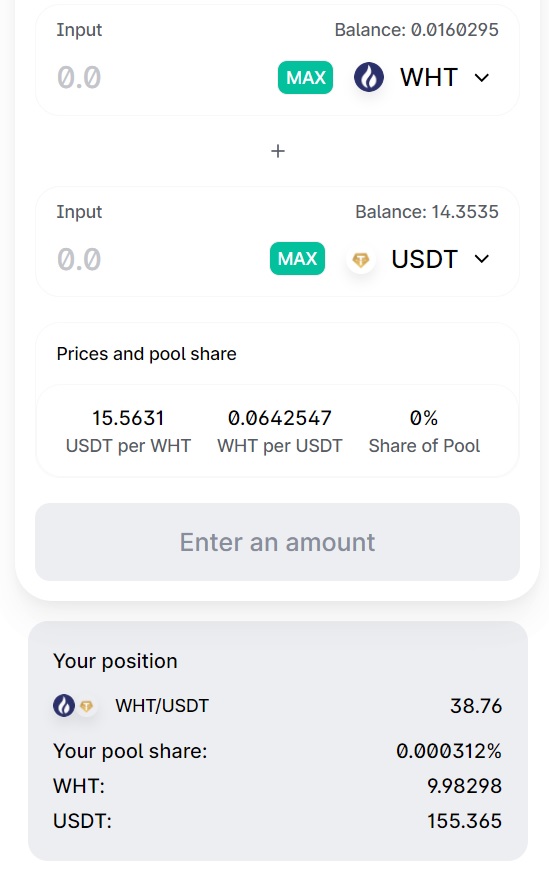 Next, go to the Liquidity Mining section.

There will be 2 more items here, “Mdex LP” and “Single Token”. 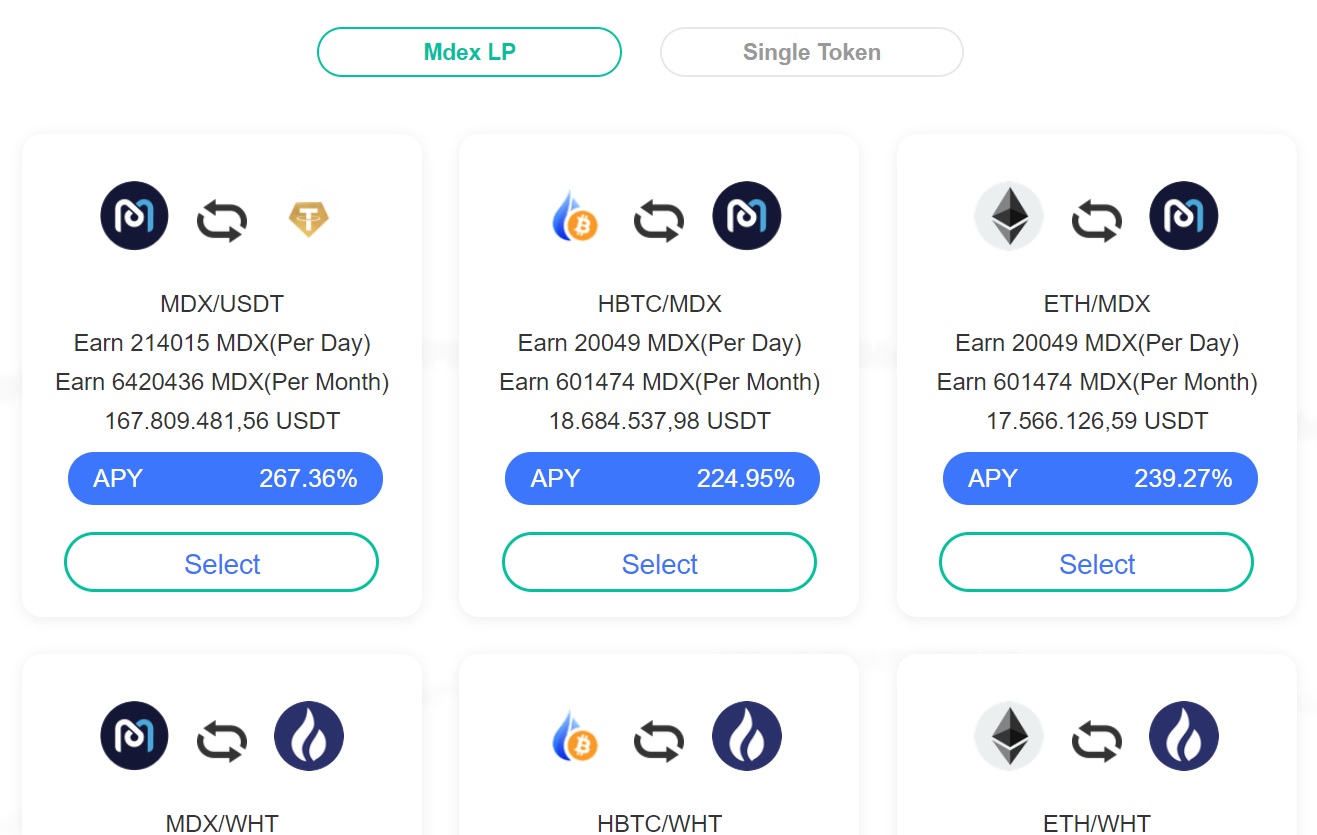 Mdex LP is my pairing to farm, and in Single Token means single token, I only choose 1 coin to farm.

There are many farming options and interest rates are varied.

To farm, you need to have that coin to put it into liquidation.

For example, to farm the WHT/USDT pair, you must have WHT and USDT. If you don't have WHT, then go to the swap section to trade (review the trading instructions above).

Choose the pair you want to farm (for example, here I choose WHT/USDT).

This is the proof that I provided earlier. Then select MAX and press Confirm. 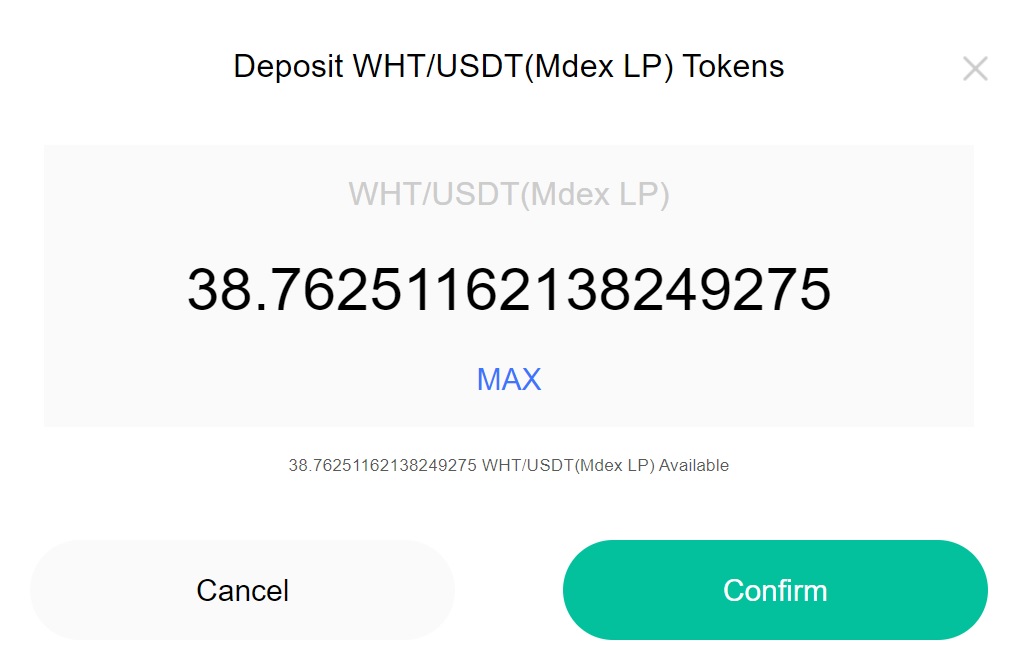 Ok, if you've come this far, it's done, the rest is just waiting for the reward.

This will depend on which interest rate you choose, the rewards you receive will show up in real time.

If you want higher yields then you can choose other pairs, for example ETH/WHT.

Finally, if you want to harvest then click “Harvest All Token”, it will show the transaction window, click confirm and the reward will be returned to the wallet.

And if you don't want to farm anymore, click "Unstake" to receive the reward and the original, here's an example. 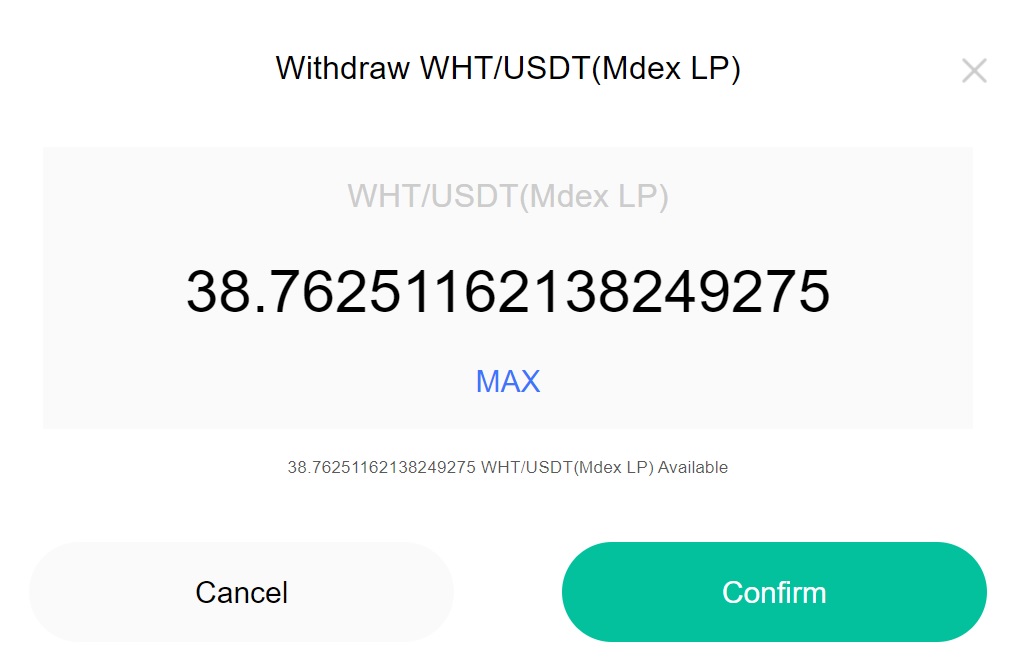 Then it will return you the proof of liquidity, then you go to Liquidity > remove it, to withdraw WHT and USDT.

You go to Swap > General Capital, scrolling down will show your liquidity proof.

Note that when you farm, it will not show this item, it only shows when you Unstake.

You click Remove to proceed to withdraw the coin. 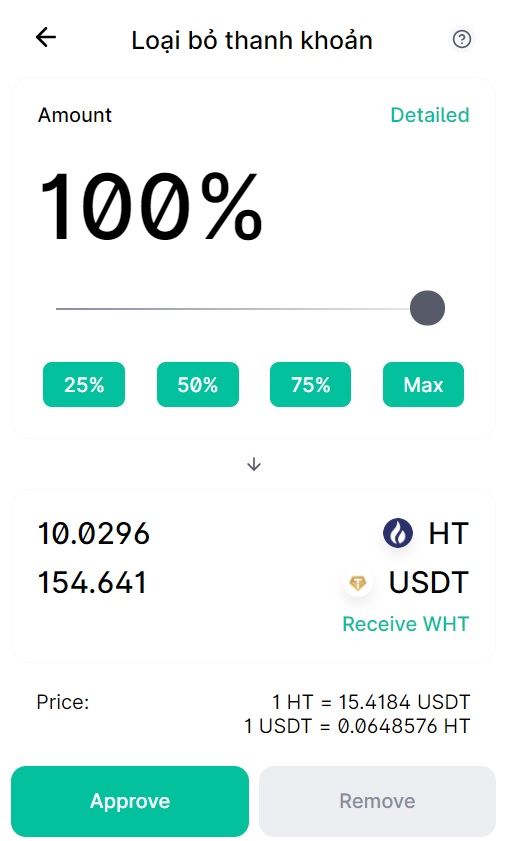 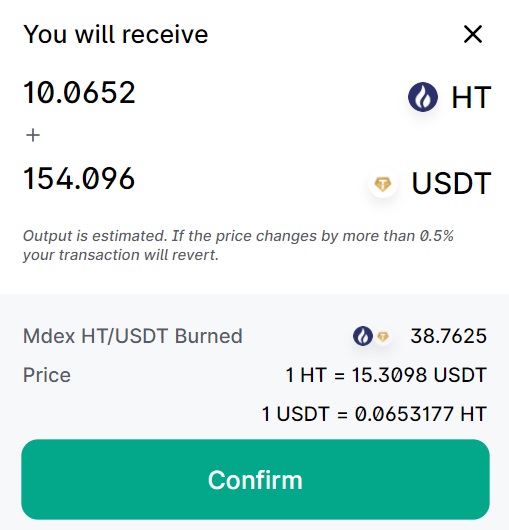 Ok that's it, check your wallet, it has returned the coin to your wallet already.

In the future, MDEX will establish a fund to support new projects on HECO or BSC…

MDEX has partnerships with many big names such as Huobi, Binance, CoinmarketCap…

The appeal of the bull cycle and high performance in the DeFi market has led to strong growth of DEXs since 2021.

However, the increasing gas fees in Ethereum have created a so-called “spillover effect” in the market, which has spurred the development of DEXs like MDEX and Pancakeswap.

MDEX currently has relatively low transaction costs, and users even receive a reward of MDX when trading.

In the long term, as the ecosystem stabilizes, low transaction fees, low slippage, diverse trading pairs and high transaction quality are the core competitive factors of MDEX compared to other DEXs. 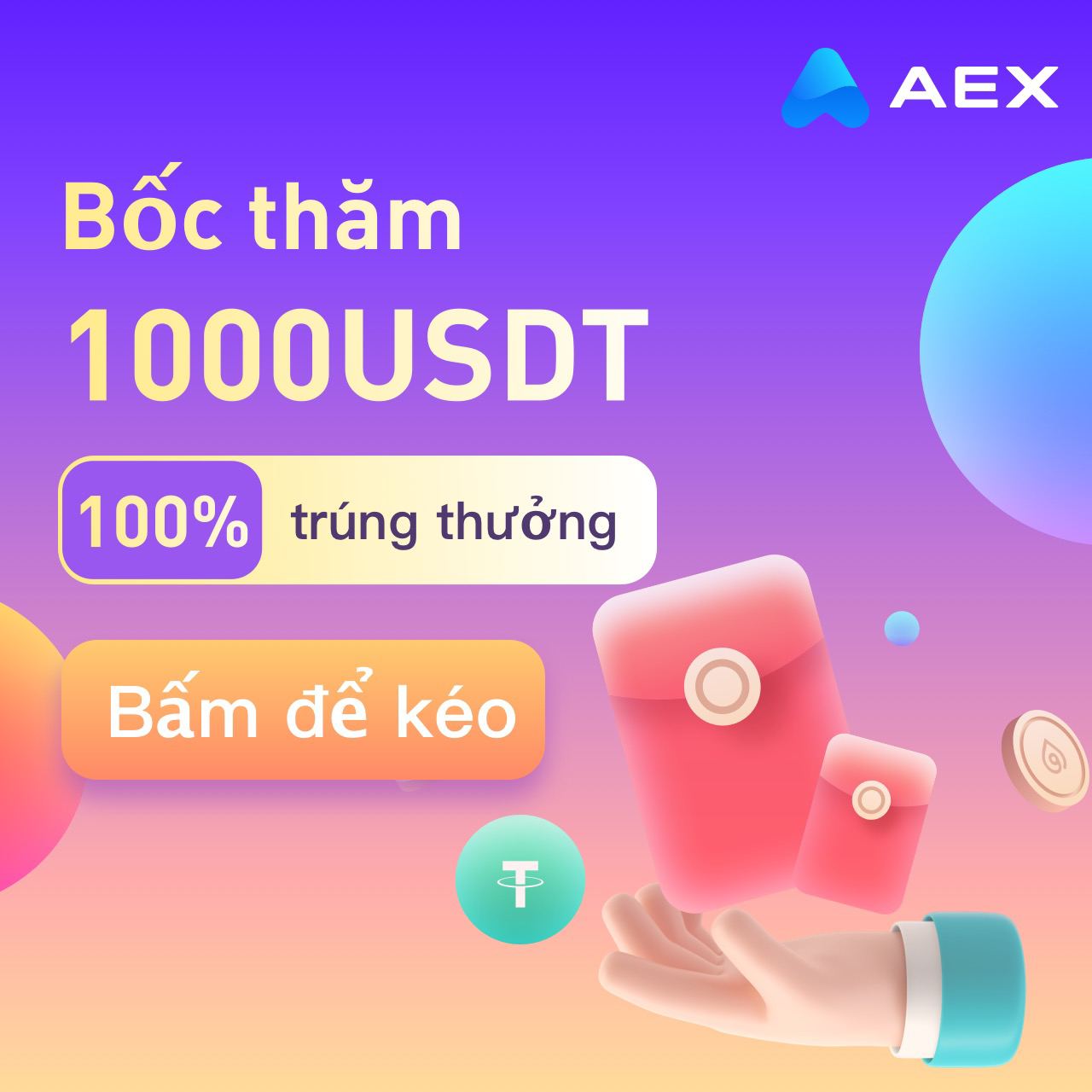