What does the bear and bull symbol mean in the stock market as well as the cryptocurrency market? We often hear the terms "bull market" and "bear market" in technical analysis, so what exactly is it, let's learn Blogtienao offline. 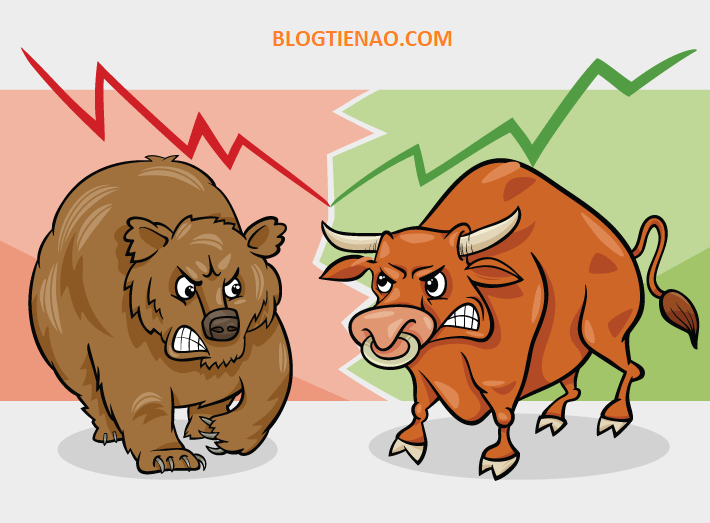 Most famous is the large statue of a cow built on the edge of the road leading to Bowling Green Park, very near Wall Street, so it is also known as Wall Street Cow.

This cow is a sculpture of artist Arturo Di Modica, a heroic bronze that symbolizes the power of Americans in economic work after the Wall Street stock market crash in 1987.

This cow appeared on the sidewalks of New York City but has been standing on the side of Bowling Green Park since December 15, 12. Bull head towards Broadway, known as the American theater capital. Mr. Di Modica describes the cow in a state ready to plunge forward, knocking down all barriers to symbolize the acceleration and strong development of the stock market. Over time, the bull statue became more and more famous along with the development of the New York stock market. No tourists visiting the Wall Street Financial District forgot to visit cows, taking souvenir photos with cows.

So, what are "bear market" and "bull market"? What does it indicate to market trends and what does it say? Here, we learn about these terms.

Bull market refers to a market that is on the rise. That is characterized by a steady increase in the market price of shares (stocks). During the time when the market is a "bull", investors believe that an uptrend will continue.

The bear market is a bear market. Stocks are constantly falling and the result is a downward trend that investors believe will continue for a long time.

The bear market dominated during the past year

1) Stock supply and demand: in a bull market, demand for securities is higher than supply. In other words, many investors want to buy, while very few want to sell. As a result, the stock price increased. Meanwhile, in the bear market, there are more people who want to sell than to buy. Demand is significantly lower than supply and inevitably leads to lower CP prices.

2) Investor psychology: In the bull market, most investors are interested in the market, they are willing to participate in the market in the hope of gaining profits. In contrast, in a bear market, investor sentiment is negative, causing them to flee the market and this sometimes pushes the market down further.

3) Change in economic activity: A bear market is often associated with a weak economy, when most businesses are not highly profitable. Of course, this decline in profits will directly affect the way the market valuates the stocks. In a bull market, the opposite will happen.

There is no exact source of these terms, but these are the two most common hypotheses:

1) In terms of morphological characteristics, the bear and cow markets are named in such a way that these animals attack their victims. The typical attack of a bull is that it raises its horn to attack forward, while a bear will strike its victim with a sharp claw.

2) Historically, middlemen in the bear skin dealer will sell skins they have never received, and in the current language, they are short sellers. profit on the fall of stock prices). After reaching an agreement, committing to customers that their bear skins have been paid in advance, these brokers will expect the purchase price of bear skins from hunters in the near future to be low. than the current price. If the sale were to occur, they would gain a personal profit from the difference between the two prices. These intermediaries are known as "bears", short for "bearskin jobber" (bear-skin speculators). And since then the term has been widely used to indicate that someone wants or expects the market to go down.