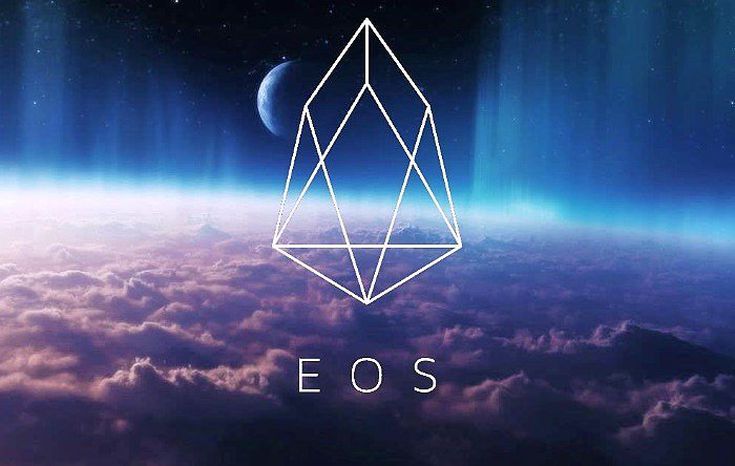 What is EOS? What problems can Blokchain EOS solve? What features does the platform have different from other platforms? ... All questions around the project will be answered in the following article. Let's Blogtienao find out!

EOS (EOS.IO) is a platform Blockchain to develop the Decentralized applications (DApp) vertical and horizontal.

The project will make it easier to develop DApps, by providing services and functions like the operating system that DApps can use.

In simpler terms, EOS wants to provide a simple DApp platform, helping users to use them daily.

It is the development direction and features of the platform that have caused many to call EOS "the killer of the" Ethereum".

The goal that EOS is aiming for

The goal of EOS is to build a blockchain platform that can process thousands of transactions per second without the need for on-chain transaction fees.

This means that when Block Producers produce blocks, EOS's Blockchain itself will pay for them. This eliminates charges to users.

In addition, EOS wants to be the first decentralized operating system, providing a better development environment for decentralized applications.

Why is EOS the "killer of Ethereum"?

With the nickname "the killer of Ethereum", it means that EOS not only can do what Ethereum can do, but also do better.

But what does EOS do better than ETH? See also the chart of Blockchain EOS and Ethereum Blockchain comparison: 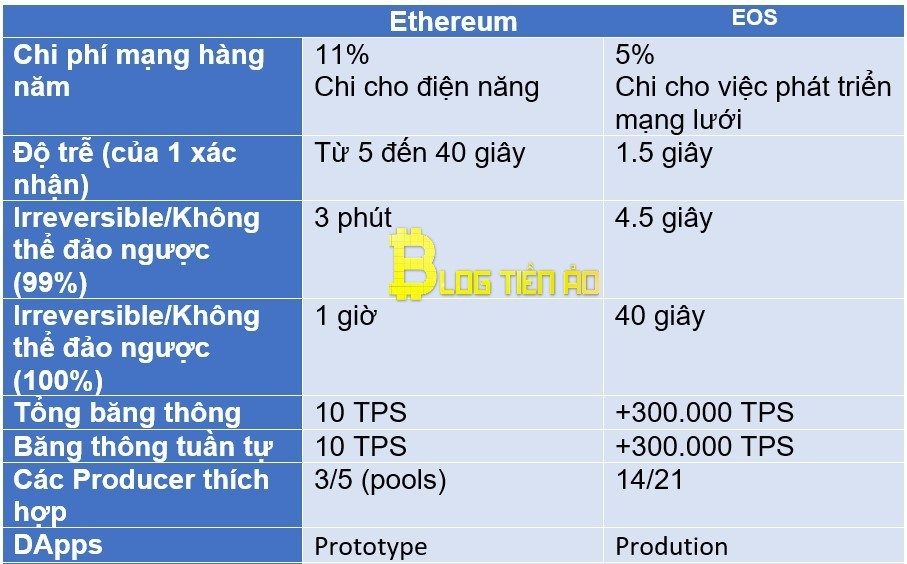 Ethereum's blockchain can only process 15 transactions per second, which is too little for global adoption. The reason is that Ethereum uses a Proof-of-Work (PoW) algorithm - an algorithm that is slow, expensive and harmful to the environment.

Although the Ethereum development team has tried to take many remedies, so far it has not achieved the desired effect.

In contrast, the EOS Blockchain uses the Delegated-Proof-of-Stake (DPoS) algorithm. This algorithm can fix the current issues that Ethereum is trying to solve.

In addition, EOS Blockchain can freeze transactions to avoid attacks like the DAO case in 2016 thanks to DPoS algorithm.

Some features of EOS Blockchain

The biggest headache that Blockchain platforms need to solve is scalability if they are to be widely applied.

Here, Blogtienao will briefly outline the scalability of some digital and traditional platforms for you to have a better view of this issue:

According to the above data, traditional platforms are having a great advantage in this regard.

However, EOS claims its use of DPOS can easily handle hundreds of thousands of transactions per second.

When the DAO curve struck, an entire Ethereum Blockchain system came to a standstill. At that time, everything stopped and the community was divided because hardfork.

But with the DPOS algorithm, this phenomenon will not occur in the EOS ecosystem. When a DApp fails, manufacturers can freeze it locally to fix the problem.

The governance of EOS Blockchain is strictly regulated and legally binding.

Constitutions and protocols may be modified according to the procedures imposed. So when an attack like DAO takes place, producers have the power to speed up the process of fixing bugs and blocking.

This means that EOS Blockchain can handle smart contracts in parallel thanks to horizontal scalability, asynchronous communication and interoperability.

To ensure that EOS blockchains are not dependent on any platform, organization or individual in development or maintenance; So blockchains will have to generate a natural inflation of 5% per year.

Unlike other blockchain platforms, EOS blockchain users will have no transaction fees when making token transfers within the platform.

The EOS development team has created a development toolkit for EOS. This toolkit is a collection of tools provided to programmers to create applications.

The more sophisticated the development toolkit is, the more developers can solve problems and create similar sophisticated applications.

The EOS blockchain has a complete authentication system with full features.

In addition to some basic authentication such as: authenticating user accounts, completing various types of permissions, securing local user data, ..., the feature of recovering stolen accounts also appears in the system. system.

Users are provided with various ways to prove their identity and restore access to the compromised account.

The highlight of the project

In this EOS project, one of the main points that interest the leaders of other projects in the industry is the platform's claim to handle hundreds of thousands of transactions per second, although this is only the idea. Conceptual idea.

Some controversy surrounding the project

Right from the end of the EOS ICO, a series of controversies surrounding this project broke out:

The EOS platform is likely to be abused

With the feature allowing users to make anonymous transactions, the platform is likely to be taken advantage of by drug dealers.

Besides, the system can hide the balance in user wallets is another loophole for those who want to evade taxes.

However, this is only a very small component in the ecosystem. 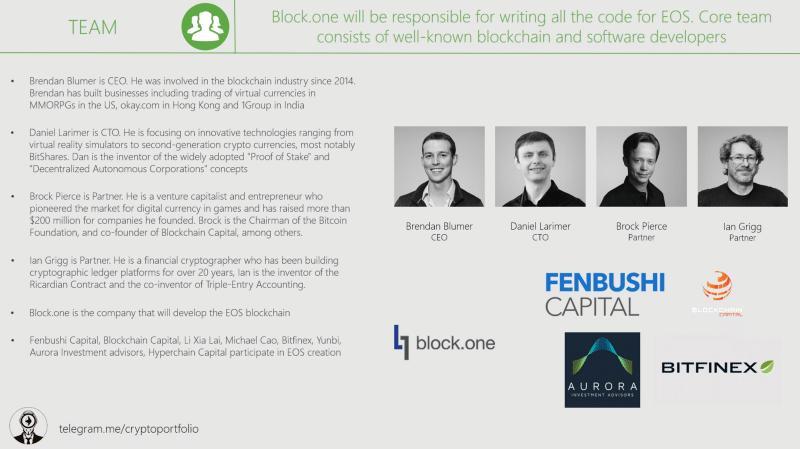 Block.one is the company building the EOS.IO software. CEO Brendon Blumer has been involved in blockchain since 2014.

The global community behind EOS is vibrant, with lots of love from investors and contributors. The Telegram, Facebook, Twitter and Steemit groups have also been very active in recent times.

About the EOS token

The EOS token is the original token of the EOS Blockchain. They are built to standards ERC-20.

The EOS token itself does not perform the function. They are only useful when developers develop applications on the platform. At that time, they must use this token to create their specific application token.

Each application is built on a platform that depends on the vote of the token owner.

You can view prices in real time squid fishing tours.

Factors that affect the price of EOS

One of the strongest factors affecting EOS price is the volatility of Bitcoin price.

In fact, up to the present (February 2), most altcoins are still affected by the price Bitcoin and EOS is no exception.

In addition, attacks on the EOS platform or even an attack on exchanges, and haker stealing EOS will have a significant impact on the price of the token.

If you are a trader, you can store on the exchange for convenience, but only with enough to trade.

If you are a holder, the safer solution is to store them in cold wallets like: MyEthereumWallet, Ledger Nano S ...

Above are the two most common ways today. However, Blogtienao has written a pretty detailed article on this issue, you can refer to:

Where to buy, sell and trade EOS tokens?

EOS is currently listed on many major exchanges Bittrex, Binance, Bitfinex... so buying and selling has become a lot easier.

Should we invest in EOS tokens?

With features that are quite prominent compared to other blockchain projects, it can be seen that the future of EOS will be very optimistic if the development team can accomplish the goals they set.

However, although the development team has been proven to have a high vision, until now, they have not made impressive breakthroughs to accomplish the goals, even though they have a rich budget. 4 billion USD.

Therefore, we urge you to consider carefully before making a decision. And hope you always remember one thing, any investment has potential opportunities and risks.

With this article, Blogtienao hopes to bring you all the necessary information about the project. Wish you a successful investment!