What is a Smart Contract?

Smart Contract (Smart Contract) is a term describing a special set of protocols capable of automatically implementing terms and agreements between contracting parties (in this case, computer systems) thanks to the support of Blockchain technology. The entire operation of Smart Contract is done automatically and without outside interference, or through an intermediary third party. Transactions made by smart contracts are transparent, easily accessible, and cannot be tampered with or reversed. The terms in Smart Contract are equivalent to a legally binding contract and are recorded in the programming language. 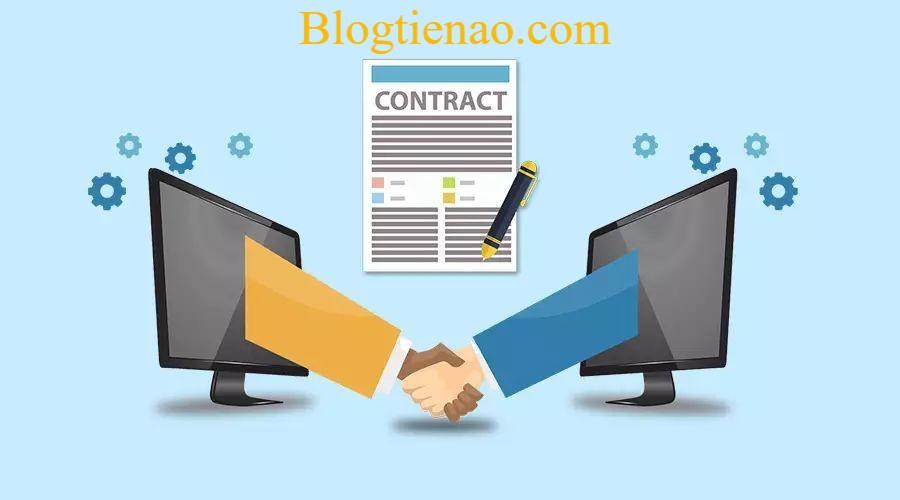 The most outstanding feature of Smart Contract is to allow both parties to perform the contract accurately, safely and quickly; without the need for the parties to know each other from before, nor need to meet face-to-face to be able to work together, or a third party that just needs an Internet connection. The concept of Smart Contract was first known by Nick Szabo in 1993.

At that time, he stated the main operating principles, but at that time there was still not enough technology and appropriate environment to realize it. But things have changed with the advent and development of Blockchain technology.

How does Smart Contract work?

The mechanism of action of the Smart Contract It can be said to be the same as a vending machine. This means that they will only automatically execute terms that have been preprogrammed before they are met.

After receiving the deployment order, the contract will be implemented in accordance with the predefined terms. At the same time, Smart Contract will automatically check the process of fulfilling the commitments and terms stated in the contract.

For example, to help you understand:

Suppose you want to rent an apartment from me. You can pay your rent electronically via Blockchain. The receipt will then be included in our smart contract; I will give you the password to enter the apartment on a given date. If the password does not arrive on time between the two parties, the smart contract will return the money. If it comes before the deadline, the system will retain both the money and the code until the expiry date. The system operates based on clauses "If - Then" and monitored by hundreds of people, so there will be no error of delivery.

What are the benefits of Smart contract?

Smart Contract is an application that takes advantage of all the advantages of Blockchain technology so it has many benefits, below are its main benefits.

Pros and cons of Smart Contract

What does it take to create a Smart Contract?

To make up one Smart Contract, you need to have the following:

The application of smart contracts

According to Jerry Cuomo, vice president of Blockchain technology at IBM, he believes that Smart Contract - smart contract can be used in many cases, from financial services, healthcare to insurance. Here are some examples of its applications:

It is difficult to manipulate the election results, but it is still possible, but smart contracts will never be manipulated. Because the vote is protected by the ledger will need to be decoded and need to have a sufficiently strong access to it. And the truth is no one holds such power in blockchain.

Blockchain Not only provides a reliable ledger, but also eliminates risks thanks to an automated, transparent and accurate system. Usually, business activities are not always favorable because of waiting for consensus or resolving external and internal issues. Blockchain ledger will solve this.

In 2015, the Trust & Clearing Group (DTCC) used a Blockchain ledger to store information about $ 1.500 trillion worth of securities assets, which means 345 million transactions.

Supply chain In any business, it is a stretched system and consists of many different parts. Each department has certain jobs, which must be done sequentially. And must be recorded so that when the problem arises know where the problem

This is a long and inefficient process, but with Smart Contract, every part of the team can track the progress of the work from which to complete the task on time. Smart contract ensures transparency in contract terms and prevents fraud.

It can also provide us with the ability to monitor the supply process if integrated with the Internet of Things.

With Smart Contract The patient's medical record will be encrypted and stored on Blockchain with a private key, only those with that key can access the records. At the same time the bills for the surgery are stored on Blockchain and automatically transferred to the insurer. The ledger can also be used in health care management, such as medication monitoring, test results and management of medical supplies.

Besides Smart contract, there are many other applications, for example in management, banking services, insurance, real estate, and so on.

Above is the article "What is a Smart Contract? How does it work, what are its benefits?”, Hope to help you with more useful things about smart contract - Smart Contract. If you still have any questions or would like to share your knowledge Smart Contract With us, please contact us in the comment section below, we will respond to you as soon as possible.

Finally, don't forget Like, Share and give us one 5 star rating below to support Virtual money blog ok