All you need to know about Parachain Auctions 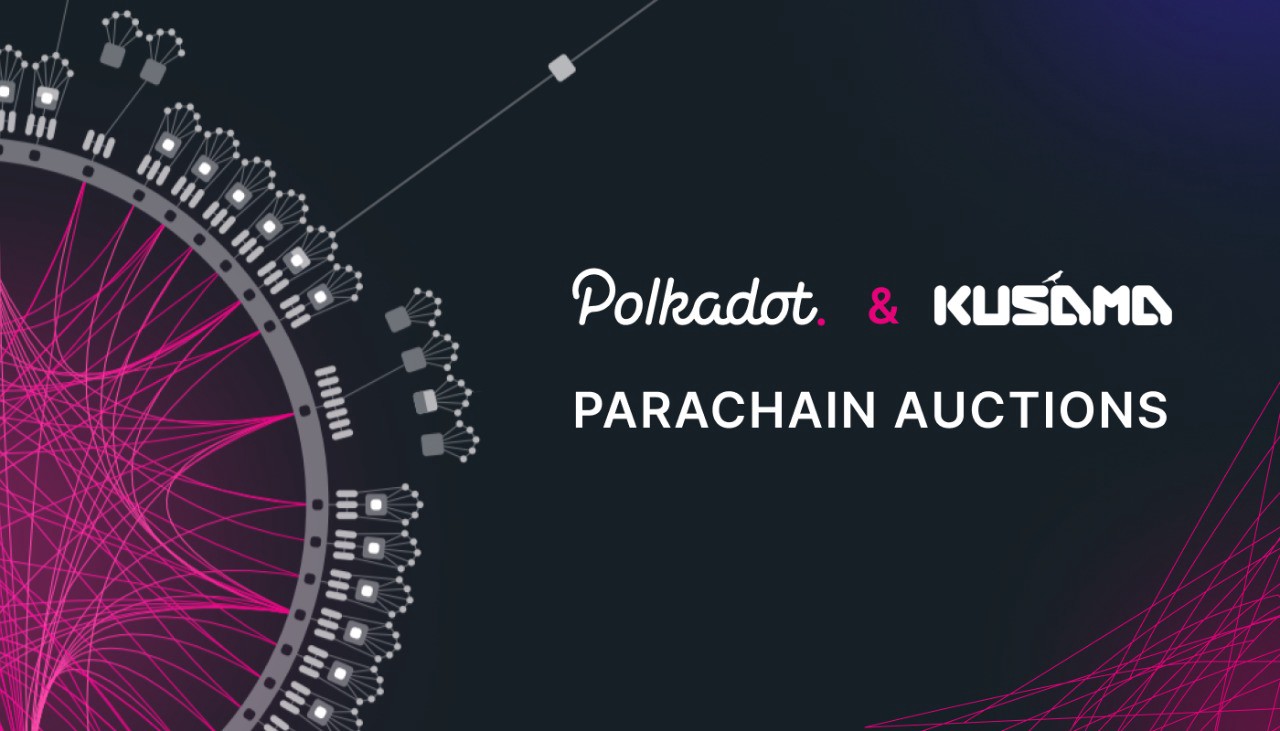 Learn together about one of the most anticipated events of 2021.

Imagine a future when there are over a thousand blockchains, each dedicated to a specific use case.

Now, imagine that all of these blockchains are interoperable – sending tokens, calling functions, initiating smart contracts, etc. Such a setup would remove the need for intermediaries between industries. different.

For blockchain technology to revolutionize the world, the Internet of Blockchains is the necessary next step.

By far the best solution to this problem is through the use of Bridges. Bridges are amazing – they are networks/blockchains that help connect other blockchains together.

However, because this connection is unnatural, interoperability suffers. Interoperability is the ability of protocols (blockchains or decentralized applications) to interact with each other in a permissionless way – that is, they constantly talk to each other and leverage each other's code.

Defi can grow enormously thanks to the seamless interoperability of smart contracts on the Ethereum blockchain. Take for example the automated investment product, Yearn. People put their money in the Yearn to make a profit. Yearn takes this portfolio and puts them in other DeFi protocols (Sushiswap, Compound, etc.) to generate that return.

So what if blockchains could interact with each other without any intermediaries?

Thankfully, Polkadot and Parachains are poised to lead us into this glorious multi-chain seamless interoperability future. But for this to happen, parachain auctions must be held. What is a parachain auction?

To answer that, we need to know what polkadot is?

Technically, Polkadot is a superprotocol that connects layer 1 blockchains (and any networks). To better visualize, imagine a circular pipe with lots of holes for the pipes to join together.

Because it exists to connect multiple blockchains, Polkadot has several advantages over conventional layer 1 blockchains. The first is scalability.

By having multiple chains run concurrently processing transactions, each blockchain is provided with more computing power, which helps to solve the problem of scalability. Other advantages include:

As a result, any blockchain that decides to build on top of Polkadot is immediately provided with all these benefits without having to build it yourself. This brings us to the concept of parachain slot (parachain slots).

What are Parachain slots?

Parachain slots are like holes in a round pipe. Any layer 1 blockchain that can connect to the pipeline will be upgraded to a parachain. Being a parachain is quite a big deal because in addition to all the benefits that chains bring as mentioned above, parachains also have the following advantages.

The way the Polkadot system is set up, no parachains are default. Every project (blockchain layer 1) that wants to become parachain has to bid to compete. This is because parachain has a limited quantity. Furthermore, even if parachain could integrate all layer 1 blockchains, for maximum security, it would not be wise to connect them all at once.

What is Parachain Auction?

Parachain auctions are auctions held on the Polkadot relay chain to determine which blockchain to connect to the parachain slot.

Teams bid using DOT or KSM. Normally, the person with the highest bid wins the spot, but Polkadot auctions are a little different. To find out, let's take an in-depth look at the auction process.

Before each parachain auction, there is a dedicated period for loans from the community.

Crowdloans allows small teams to raise DOT or KSM from their community or interested investors.

Especially the user's locked coins are not owned by the projects. Instead, the relay chain holds these coins for the duration of the parachain lease, which, at expiration, returns the coins to the user. When the crowdfunding period ends, the parachain auctions begin.

The auction process is quite simple. Its structure is that the start and end times will be known to everyone.

Only one parachain position can be auctioned at a time, and each auction process lasts for 7 days on Kusama and 2 weeks on Polkadot.

If everyone knew the end time of an auction, some would use Action Snipping. This happens when an auctioneer waits for most of the auction time to bid higher, leaving no time for the remaining bidders to bid even higher.

In this case, the Polkadot network was severely damaged and this harmed all DOT owners. Ideally, the higher the number of DOTs participating in the auction for a parachain lease, the more secure the network.

Therefore, how does Polkadot ensure that projects will bid the maximum amount of DOT in the shortest time?

Basically, projects know the end time, but this is not the real end time because the relaychain ended the auction at some point that nobody knew. 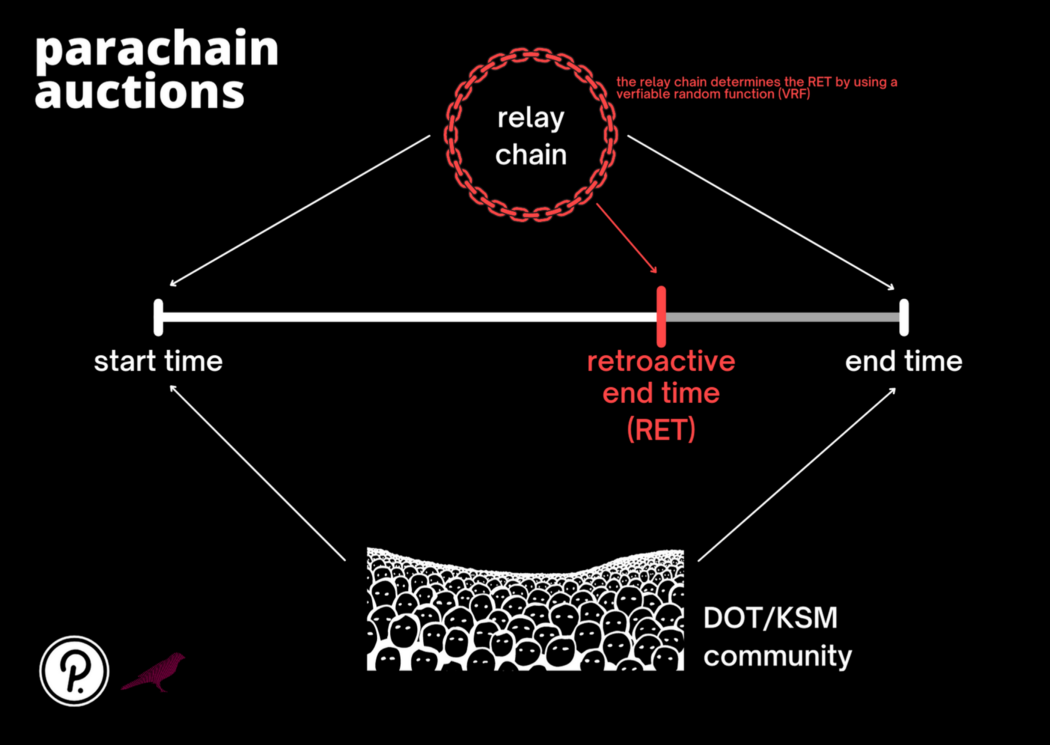 Once a winner is determined, the project that won the spot will be able to upgrade their blockchain to parachain. But this may not always be the case.

Parachain positions on the secondary market

Since there are only 100 parachain slots, once it is filled other projects can rent parachain slots from the winning projects on the secondary market. This is possible because parachain leases won from auctions are tradable, meaning one account can send it to another.

In addition, the auction process is designed so that anyone can freely bid on a parachain auction and so it is very likely that a regular whale (an individual with multiple DOTs) can win a parachain position auction, not necessarily a project.

For example an individual bids and wins a parachain lease for 40.000DOT, then he sells it to a project for 5.000 DOT. Therefore, he still has his 40.000DOT waiting to be refunded at the end of the lease and another 5.000DOT.

How long is the parachain lease term?

Parachain leases range from 6 weeks to 48 weeks for Kusama, and 3 months to 2 years for Polkadot.

What happens to the tokens used in the auctions?

If the project loses, then the tokens can be reused for another auction. If not, then they will be refunded to all crowdloan participants.

If the project wins the auction, then all tokens will be locked by the relay chain for the duration of the parachain lease. At the end of the lease, the tokens are returned to the original owner.

Important things to note: Any DOT used to obtain a parachain lease (whether through crowdloan or otherwise) is excluded from earning staking rewards. This is why you must unstake your tokens before participating in parachain auctions.

Above is the necessary information about the parachain auction that the BTA team has compiled. What do you think about the DOT system, will the auctions bring a boom to DOT? Let's discuss in the comments.